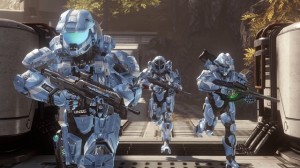 November 6th is coming up soon, which means Halo 4 will be released.  343 Industries has confirmed that The Flood will be on Halo 4 in the multiplayer section.  This is good news for us Halo fans.  Microsoft also showed off The Flood in action and a new map.  The Flood will support 10 players, with two starting off as infected according to CVG.

343 also debuted two new vehicles for the UNSC.  One is called the Mammoth, a large troop carrier, and one called the Mantis, a giant mech.  There will also be a new multiplayer map called Complex.  Below are some screen shots of the new game.  I can’t wait.  Enjoy.