Find Out Who Is Going To Be in The Female ‘Expendables’ Movie?!?!? 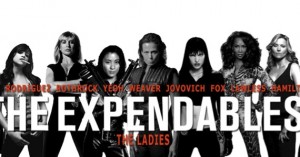 So I guess because ‘The Expendables’ has done so well, it was only a matter of time before someone thought to make the same film, but with an all female cast.  This leads to the question, who will be in the film?  Who will lead a cast of female badasses?  Well, it looks like we have our first cast member.  Gina Carano, star of ‘Haywire’ will star in this action film according to Variety.

Adi Shankar will be producing the project.  “I don’t know how I’m supposed to make a movie that is supposed to be the female version of ‘The Expendables’ without Gina Carano in it. It would be like making Twix without caramel or Jamba Juice without jamba,” said Shankar, whose shingle recently co-produced Joe Carnahan’s “The Grey,” Pete Travis’ “Dredd 3D,” Andrew Dominik’s upcoming Brad Pitt-starrer “Killing Them Softly” and the viral Internet hit “The Punisher: Dirty Laundry,” starring Thomas Jane.

Carano is a badass, but her acting needs a little work.  Who would you cast in this epic female ‘Expendables’ film?