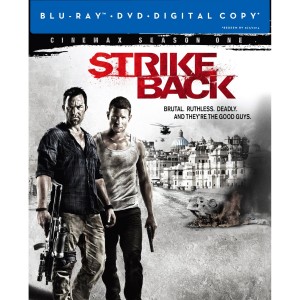 Even though this killer series airs on Cinemax, HBO is releasing the blu-rays.  And I love the fact that HBO is releasing the Digital Copies and DVD’s along with the Blu-rays in the same set.  I hope they continue this.  This is a great original series from Cinemax that looks great and sounds good too.  Not too many extras on this disc besides some commentaries, but I have a feeling that once you start watching ‘Strike Back’, you will want to watch more.

Basically, ‘Strike Back’ is a bit like ‘Mission Impossible’, in that it follows a secretive military group called Section 20, who perform necessary and dangerous tasks around the globe in order to stop crime and evil. This series also plays over in England as well as the US.  John Porter (Richard Armitage) is kidnapped by a terrorist, who is planning something called ‘Project Dawn’.  This can’t be good.  The Section 20 leader calls upon his two best men to rescue Porter, however in a live video feed, all of them witness the execution of Porter.  During the execution, Porter manages to get a secret code across to Section 20, directing them where to go.

That is how the series starts out, at least in this American version labeled season 1.  From here on out, the Section 20 unit is hunting down terrorists and it’s leader, who was the one who kidnapped Porter in the first episode.  There are tons of tense situations and very close calls.  Like I said above, ‘Strike Back’ is a mix between ‘Mission Impossible’, ’24’, and ‘Alias’.  It will definitely get your heart rate up and leave you wanting more.  The two main guys, Philip Winchester (coolest fucking name) and Sullivan Stapleton are badasses.  There are tons of sex scenes and even more ultra-violence to go around the block several more times in this series.   I believe a bunch of you readers will enjoy this series. 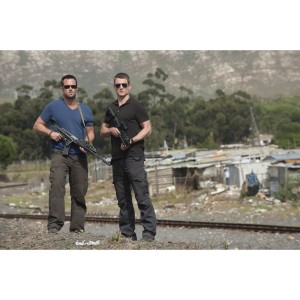 The video is presented in glorious 1080p and presented in 1.78:1 aspect ratio.  The clarity on this series is unbelievable.  You can make out stitching in the clothing, facial scars, and any wound that anybody may inflict on someone.  This is a high octane action series, and is filmed like one.  The colors are more vibrant and bright than other shows, which gives an heightened sense of reality.  Nothing is really dark here.  Even the low lit scenes, are well done, because the blacks run deep and inky.  The colors are for the most part over-saturated, which gives the actors darker skin, which I assume they like.  There was no notice of aliasing or halos throughout the series.  HBO knows how to turn out a good picture.

The audio comes with a lossless DTS-HD 5.1 mix and sounds very good.  This is one of the most action packed series to come out recently, with tons of explosions and millions of bullets flying everywhere.  The question is, does it sound good?  Yes, yes it does.  Each bullet that is shot and flies by, sounds amazing on all of the speakers.  The audio transitions are pretty much flawless here.  The dialogue is crisp and clear and centered perfect on the front speakers.  The explosions will pump that bass of yours up and shake the house.  The ambient sound is good and smooth, never to overbearing as with the score, its near flawless too.  Great video and audio presentations here. 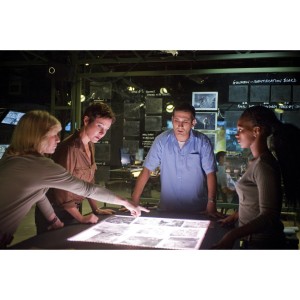 – Audio Commentaries – There are only five commentaries on this set of 10 episodes, and it’s the only extra on this.  I’m surprised HBO didn’t want to include more here.  The commentaries feature executive producer Daniel Percival, and several of the actors.  It’s actually a good listen, as each person talks about the production of the series and how some of the stuff was done.  Yes they even talk about the sex scenes.  I’m sure fans of the series will enjoy this, as it keeps you attention.

‘Strike Back’ is a fun as hell series, with some killer tense moments, and tons of action and violence.  Not to mention quite a bit of explicit sex scenes.  The video and audio are top notch here, which is always good.  As for the extras, I wish there was more to it than just commentaries.  Maybe on the 2nd season blu-ray, there will be more.  Right now, you can get this set which includes the blu-rays, the DVD’s, and the digital copies for only $34.99.  That’s a good price.  Any higher than that, then I’d wait.