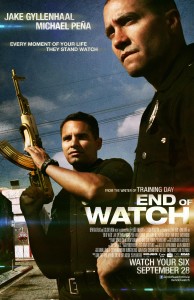 ‘End of Watch’ is one of the best cop films of recent memory.  Director and writer David Ayer captures the life of the L.A.P.D on duty and off duty.  Ayer is no stranger to the police officer story line, as he wrote ‘Training Day’ and ‘Dark Blue’.  But with ‘End of Watch’, he scraps the bad and corrupt cop vibe to more of a realistic setting with good cops on the job.  The guerilla camera-work really puts you in the middle of intense situations that cops walk into daily.  ‘End of Watch’ is one thrilling ride from start to finish.

The film centers on two Los Angeles police officers, Officer Taylor (Jake Gyllenhaal) and Officer Zavala (Michael Peña)/  Taylor and Zavala are pretty successful street cops who have been partners for a while.  Taylor narrates the opening part of the film telling us about the ultra-violence and terrible things you see on the streets as a cop, but then says, “…beyond my badge is a heart just like yours.”  I love that line because it shows you that these officers are the same as us civilians with the same wants and needs.  Taylor says he is taking a small film course at a local college and that he is constantly carrying around a home video camera on the job to document his life. 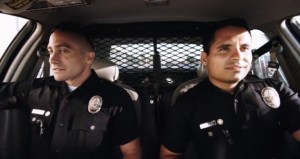 Some of my favorite scenes in the film are with Taylor and Zavala driving in the police cruiser from call to call.  These two have great chemistry and are completely funny together.  As part of the audience I viewed the film with were actual police officers, they all agreed how real the partnership and dialogue between Taylor and Zavala were.  Zavala and Taylor talked about their love life, partying, high school, and daily routines.  It’s extremely funny and is just like the dialogue my best friend and I would talk about.

Basically, ‘End of Watch’ plays out like a hardcore episode of ‘Cops’, with Taylor and Zavala responding to call after call.  But these calls involve grizzly murders, human trafficking, tons of drugs and weapons, and horrible child abuse.  During one of the big busts, Zavala and Taylor are confronted by a special forces guy who informs them that they have just interfered with a huge Mexican drug cartel, and to expect some sort of retaliation on themselves.  From that point, things heat up as the american gangsters working for the cartel devise a plan to get Zavala and Taylor to respond to a phony call in order to take them out.

Peña and Gyllenhaal are excellent in their roles.  I know each of them spent a lot of time with real police officers doing ride-alongs, and it shows.  They play their parts flawlessly.  With the hand-held video camera feel throughout the film, some people might be apprehensive to see it, but let me say that’s not the case.  You won’t feel sick from it, however you will feel like you are right next to the action.  It will have you on the edge of your seat.  There are four different endings to this film that were shot.  I’m not quite sure if the ending I saw will be same ending you will see, but I imagine they will all be on the blu-ray when that comes out.  I recommend ‘End of Watch’.  It’s on of the best cop thrillers since ‘Training Day’.

Below you can watch and listen to the Q&A we did with stars Michael Peña and Natalie Martinez on the making of this film.  It runs a little long, but there is a good bit info on the making of the film as well as some funny anecdotes.  Enjoy.