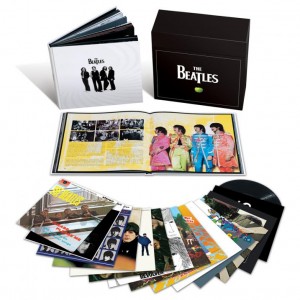 The wait is ALMOST over, folks! We at Boomstick, and I’m sure the rest of the world, have been wondering if/when the 2009 Beatles’ Remastered catalog would see a proper vinyl release, aside from the Record Store Day singles release from last year. The good news is all those classic LPs, from ‘Please Please Me’ all the way down to ‘Let It Be’ will see an official release in North America on November 13th, just in time for the holidays. Available individually or bundled in a limited edition collector’s box set, this will be at the top of many a holiday wish list!After a massive undertaking, The Beatles’ catalog saw proper stereo remastering and release in 2009 to some very high praise, and again in 2010 when their catalog hit iTunes. If you think the digital versions of these remasters sound great, I can only imagine how awesome the vinyl counterparts will sound!

The titles include The Beatles’ 12 original UK albums, first released between 1963 and 1970, the US-originated Magical Mystery Tour, now part of the group’s core catalogue, and Past Masters, Volumes One & Two, featuring non-album A-sides and B-sides, EP tracks and rarities. With this release, The Beatles’ first four albums make their North American stereo vinyl debuts. Each record comes faithfully reproduced with original packaging and inserts, including The Beatles’ self-titled album (AKA ‘The White Album’) with fold out poster and photos of the lads, as well as the cutouts inside of ‘Sgt. Pepper’s Lonely Hearts Club Band.’

If that weren’t all, 2013 will see the debut release of remastered albums in mono.

No cost breakdown of the individual albums or limited edition box set as of yet, but I’m guessing they will be in the $20-$25 range for each release, and maybe $450+ for the box set. Hopefully, I’m shooting too high on both. But, if you think you may want to get your hands on the box set edition, there are a bevy of treats exclusive to the releases, like the 252 page hardbound book discussing each album and the remastering process in great detail, all the way down to the vinyl mastering for this release, as well as some rare photos that were not included in the original 2009 CD remasters.

So, if ‘Abbey Road’ has been the top selling vinyl record in the US for the last three years, I wonder how the entire remastered catalog will fare in the album sales department? Either way, I’m pretty excited to get my hands on these babies!

Here is the list of what you can expect:

Please Please Me
“Love Me Do” and “P.S. I Love You” are presented in mono
(North American LP debut in stereo)

With The Beatles
(North American LP debut in stereo)

Let It Be
Original album

Past Masters, Volumes One & Two (double album)
“Love Me Do” (original single version), “She Loves You,” “I’ll Get You,” and “You Know My Name (Look Up The Number)” are presented in mono. Packaging, notes and photographic content is based on the 2009 CD release.

For more info on the vinyl releases, as well as screenings of the remastered “Magical Mystery Tour” film, check out The Beatles website.