‘The Rocketeer’ Will be Remade!!! 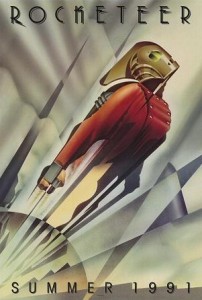 Disney is getting back in ‘The Rocketeer’ business.  Since Disney is under new management, at least its film department, one of the first properties to be developed is ‘The Rocketeer’.  The original Rocketeer premiered in 1991 and was actually a comic book as well from Pacific Comics and thought up by Dave Stevens according to Vulture.

Right now, Disney is looking for writers to pen a script, and then they will go from there.  But this is a high priority for Disney, and I’m willing to bet they want to make a few of these films.  Say what you want, but Rocketeer and Iron Man have a lot of similarities if you think about it.  And since Iron Man has done wonders for Marvel, and now Disney owns Marvel, I’m willing to bet that we will see a big budget Rocketeer film in the vein of the Iron Man films.

Rocketeer centers on ” a racing pilot named Cliff Secord (Billy Campbell) discovers a rocket-pack prototype in his stunt plane, hidden there by the gangsters who stole it from Howard Hughes; Secord tries it out, and, like Tony Stark, quickly discovers that a) flying without a plane is SO cool, and b) you gotta fight the bad guys (including Timothy Dalton, who two years prior had starred as James Bond for the second time) and save the girl (a luminous Jennifer Connelly).”