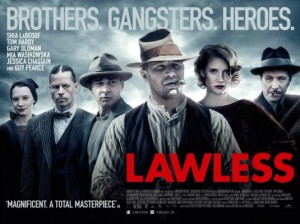 Based on a fictionalized version of true events, Lawless is a violent – very violent – tale of a family’s fight to sell moonshine on its own terms. With a star studded cast including Gary Oldman, Shia LaBeouf, Tom Hardy, and Guy Pearce, the story of the Bondurant clan and their fight to maintain a way of life in Prohibition era Franklin County, VA will leave you cheering for the lawbreakers, cringing at the violence of organized crime, and wondering what exactly the Bondurant moonshine recipe was.

In an opening that plays out like an alcoholic version of the Fiddler on the Roof opening, we come to know the three Bondurant brothers as they travel around Franklin County in an old jalopy, delivering their product to loyal customers. Where Tevia was someone who discussed his troubles with God, the Bondurants are more of the type to identify troubles and brutalize the source of them. Jack Bondurant (LaBeouf) narrates the story and outlines the legend that brooding eldest brother,  Forrest (Tom Hardy), is immortal and cannot be killed. He leads the clan while middle brother Howard (Jason Clarke) is the brute force who enforces Forrest’s will, and Jack is the “lapdog” who, for lack of gumption, runs errands and drives his brothers around. During the film, their circle of protection is expanded when Maggie Beauford (Jessica Chastaine), a woman running away from her past, shows up to help the brothers at their store and is drawn to Forrest. Jack adds his own complications by falling for the local minister’s daughter (Mia Wasikowska), and using his disabled friend Cricket (Dane DeHaan) to help with side projects. In the beginning, business is decent for the brothers, but several newcomers descend upon Franklin County and will change their way of life. 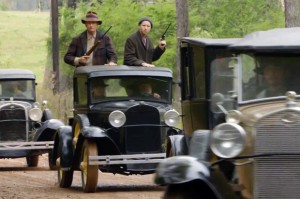 A menacing, Chicago-bred Special Agent has arrived in town, and though Charlie Rakes (Guy Pearce) plans on cleaning things up, it is actually a ploy to consolidate the production and distribution of moonshine to benefit a government attorney in exchange for not arresting the moonshiners. Unwilling to allow outsiders dictate their business, the Bondurant family alone take a stand against the corrupt government agents and what follows is an utterly violent struggle. That isn’t to say that the violence in this film is not completely gratuitous. I was cringing in my seat through much of the movie , but the violence of the era was extreme and you should be prepared to see some blood. The director and cast present a stark picture of how brutal corrupt governments and organized crime can be. In one instance, the rape of one of the female leads, the director is forgiving and does subject the audience to a drawn out graphic scene when it was not necessary. We feel the peril the woman is in, but that is all that is necessary. That being said, if mere punching makes you cover your eyes, this will not be the best movie for you.

The Bondurants continue to make it increasingly difficult for Charlie Rakes to control Franklin County’s moonshine, and as his frustration increases, Jack begins to find his way to becoming a man willing to fight his own battles. In the end, as the brothers race to support their own in a final showdown, their fellow county men join in the fray.

Even with the violence, there are genuinely funny moments and emotional development throughout the movie. LaBeouf does his usual work playing in a familiar role that begins the film as a softer, not-quite-a-man character that develops when extreme circumstances force him to grow up. He plays it well, and you enjoyably rolling your eyes at his antics, but they do get tired at a point, wanting the movie to move on. Hardy’s quieter Forrest is not menacing, but more like a man who is sure of his ability to protect his family. He also carries off a curmudgeonly humor that will make you laugh out loud, including a small jig at the end that seems very out of character for Forrest. Gary Oldman is in the film and is effective as a larger crime boss that goes into business with the Bondurants, but with such a small part, you end up wanting more and wondering what was left on the cutting room floor. The actor that pulls off the Virginia moonshiner persona best is Clarke who portrays Howard and spent time with actual Bondurant descendants to get the regional feel down. Maggie is a strong female character that knows how to be there for Forrest, but also knows her limits on what she is willing to put up with. 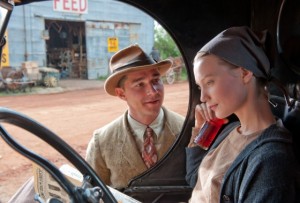 In addition to some great performances, Lawless is shot in the Appalachians with scenes that deftly illustrate the beauty and poverty of rural Virginia at the time. The music is well chosen and likely to inspire you to grab a jug and head to the hills. Though there are issues with pace, the music, the scenery and the acting prevent you from becoming bored.

There are flaws with Lawless, but ultimately it’s an enjoyable film that may not become as iconic as something like the Untouchables, but is worth going to see in the theater if you don’t mind violence and cheering for the wrong side of the law.

Watch and listen to my Q&A with Matt Bondurant below.