I had the privilege of attending WWE Summerslam and WWE Axxess yesterday. Special thanks to my lovely and patient girlfriend, who willingly stuck around for 9 hours in the WWE Universe with a guy who spent 20 minutes scheming how to shirk the rules to get a photograph with Dolph Ziggler. My review of the event itself is below, with the matches ranked in descending order by how much I enjoyed them.

I know what you’re thinking about Dolph Ziggler’s spray tan and I can confirm – it’s real and it’s spectacular. He’s a shade of orange that’s two parts “Jersey Shore” and one part Oompa Loompa.

The Jericho-Ziggler match had everything a wrestling purist (you can find us in one of the darker corners of the Internet) could ask for. A clear distinction between Good Guy and Bad Guy, some shenanigans from the Bad Guy’s manager, even the Good Guy’s taped ribs felt like an homage to simpler times.  As Dolph flopped around like the modern day Mr. Perfect and eventually tapped out to the Walls of Jericho, it dawned on me that he has quickly become the best in-ring performer in WWE; never having a bad match and always making his opponent look slightly better than he is. Of course, the last guy that was this consistent in the ring was Chris Benoit. So don’t kill your family, Dolph. It’ll make for a really uncomfortable tribute show. 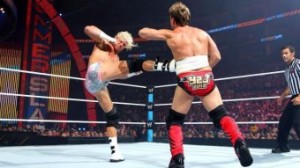 I don’t watch “Breaking Bad” so there may be some competition out there from Walter White, but CM Punk is the best television character of 2012. Sadly there’s no chance that he’ll ever be nominated for an Emmy, so Ray Romano should just give him his. Anyway, CM Punk wore pink and black ring gear to honor Bret “Hitman” Hart’s iconic performance at Summerslam 1992 (wrestling purists rejoice!) and then gave a nuanced performance that no other performer in WWE can give. He’s the Best in the World and if he remains champion until January to face The Rock, I’m going to lose my mind.

Here’s what’s beautiful about the WWE: A year ago, Daniel Bryan was an Internet darling  who had surprising luck with the WWE Divas despite being portrayed as a huge nerd on television. He started dating AJ (clearly out of his league), and slowly went from thrilled to jealous to kind of an asshole to total asshole. It culminated at Wrestlemania, when he stopped to kiss AJ before his match and ended up getting kicked in the head and pinned in 18 seconds. Naturally, he blamed AJ and dumped her. Now he’s a total mess and AJ is the general manager of Raw.

The beauty of it is that we (Internet nerds) can’t stop cheering for Bryan because he’s a nerd that bangs hot ladies and damnit we can still dream. So we keep cheering for him (repeating his “Yes! Yes! Yes!” line) even though he insists that we stop (and now repeats “No! No! No!”). So for those of us that watch Raw every week, we’re really connecting. And for people who just like heckling, they can yell “Yes! Yes! Yes!” and drive a character insane. Everybody wins! Except Kane, who despite being from hell rarely wins anything.

The Miz defeats Rey Mysterio to retain the Intercontinental Championship

I’m so damn proud of The Miz. He goes on “The Real World”, insists that he’s going to become a pro wrestler, and then ends up main-eventing Wrestlemania 27. Now he’s busting through a giant “AWESOME” pillow and pinning Rey Mysterio, which earns him bonus points because little kids love Rey Mysterio and hate The Miz. What a life. Obama should invite him to speak at the Convention on how much better his life is than when George W. Bush was in office. 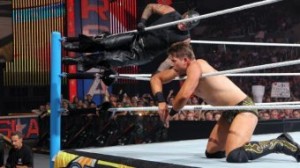 This match tied the record for most black performers in a WWE ring at one time, previously held by the Nation of Domination (a real faction in the late 1990s). Actually let’s just move on.

This one really disappointed the live crowd. Staples Center strongly preferred the Mexican Aristocrat to the Pasty Irishman. There might have been some in-group bias, but Alberto Del Rio has a personal ring announcer who wears a tuxedo and rolls his “R”s. Sheamus looks ridiculous (so, so white) and calls people “fella”. I have to go with Del Rio on that one. Also, Sheamus is the poster boy for WWE’s anti-bullying campaign (presumably because it’s easy to believe that a shockingly-pasty redhead got bullied a fair amount) but constantly harasses Ricardo and stole Del Rio’s car a couple weeks ago. This makes no sense!

Brock Lesnar might be the most terrifying person in the world. Triple H is the heir apparent to Vince McMahon. If they fought, Lesnar would win 100 times out of 100. So it requires a suspension of disbelief to make the match work.

Instead, WWE went the opposite direction: Lesnar wore his old MMA ring gear, there were boxing-style introductions, and they worked a methodical, reality-based match. BUT THIS WASN’T A REAL FIGHT!  The whole charade was mildly insulting. I watched a 200-pound vegan beat a 300-pound masked man from hell who can shoot fire from the ring on command earlier in the evening; I think I’m capable of suspending disbelief for 20 minutes so you can put on a show for me. To turn the performance into a “real fight” might have satisfied the “It’s still real to me, damnit!” guy, but the rest of us sat there thinking “Brock Lesnar should just break Triple H’s arm and be done with this” for 20 minutes. 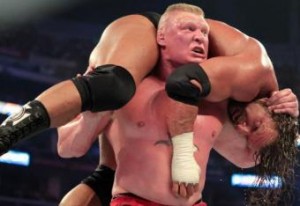 Despite the lackluster main event, I had an awesome time at Summerslam. I got the photo with Ziggler, got to fist bump CM Punk (got turned down for the handshake, but still) and saw a real life wrestling groupie. Absolutely the Biggest Event of the Summer.