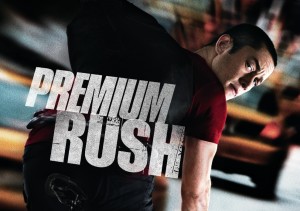 OK, so none of us had any high hopes for this film, and I’m surprised that I was still disappointed.  The entire film is not a failure, but it is a wasted opportunity for what could have been either a fantastic popcorn flick or a bona fide cult classic.

Here goes.  So Joseph Gordon-Levitt gets paid very little money for riding a bicycle dangerously to ensure that his deliveries get where they have to get to on time.  In this instance, he gets a mysterious envelope that ends up having something to do with the Chinese mafia.  That’s pretty much all the plot you have to know, and that would have been fine, except that the notorious emotionalist David Koepp tried to make this into a film with feeling instead of an all out action ride.

To be fair, the budget in this film probably all went to the actors, and they mostly delivered, at least the ones that demand a high paycheck.  Gordon-Levitt is awesome, somehow making this unrealistic character a believable person.  Michael Shannon is by far the best part of the film.  He becomes a weird manically deranged Ray Liotta-esque character, and is awesome.  And of course there’s the always hilarious but doomed to play bicycle delivery dispatcher Aasif Mandvi (See Spider-man 2,) who truly does a lot with so little of a role.  Everyone else completely phoned it in. 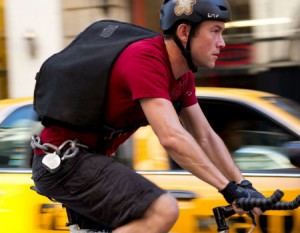 The biggest problem with this film is that it perhaps took itself too seriously.  Koepp’s screenplay is actually great, but he just didn’t know how to direct the damn thing.  If the actors could have just had a bit more freedom and bit more fun with this thing, it could have either been a total adrenaline rush or a grindhouse type hit.  This could have easily been the next Fast and Furious or Snakes on a Plane.  Instead, we get this, a half-assed action-ish flick.

Bottom line, we’re promised a high octane thrill ride, but then you realize that it’s actually running on pedals, and it feels like Koepp is still sporting his training wheels.