Bryan’s Review of ‘The Campaign’!!! 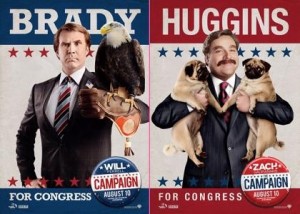 I had high hopes for ‘The Campaign’.  It seems like a flawless formula on paper by having Will Ferrell and Zach Galafianakis play bitter political rivalries for an upcoming town election.  Add director Jay Roach to the picture who is known for the ‘Meet the Parents’ and ‘Austin Powers’ series to make a brilliant comedic film.  Unfortunately, after the first half of the film, ‘The Campaign’ nose dives into unfunny and dull dialogue and story telling.  It was as if everybody had to finish the film in two days and they just put together the last part of the film in  matter of hours.  I was disappointed.

‘The Campaign’ has a run time of only 85 minutes, but felt like two hours.  It dragged and the pacing was off the mark by a mile.  This R- rated comedy will give you plenty of guy busting laughs for the first part of the film, but with the same jokes recycled from other films, and a brutal stop of comedy to make the film have a happy ending ultimately killed this film for me.

Will Ferrell plays Cam Brady, a suave and abrasive Democratic congressman who is up for re-election, and is expecting he will be a shoe-in since he is running un-opposed.  However, as we have all come to know, politicians get caught up in bizarre scandals.  This one is no different.  Brady makes a phone call to his mistress, leaving a hilarious and very crude and sexually explicit message for her entire family to hear.  This makes national headlines, which causes the Motch brothers (John Lithgow and Dan Aykroyd), a pair of corrupt brokers much like the Duke brothers from ‘Trading Places’, to fix this situation to their benefit by calling upon someone to run against Brady that will listen to their own evil schemes. 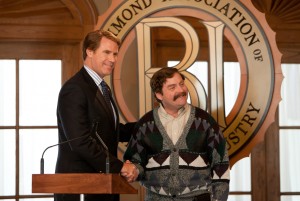 That person is Marty Huggins (Zach Galafianakis), a very feminine family man who loves his town and loves his two pugs.  Huggins serves as the straight laced Republican candidate to run against Cam Brady.  The Motch brothers hire  Tim Wattely (Dylan McDermott), a strict and slick campaign manager to transform Huggins and his family into a worthy opponent by changing his look, house, characteristics, and even his dogs.

From here on out, it is a no-holds-barred, anything goes political race complete with very unorthodox campaign commercials that will make you laugh out loud, and atrocious behavior by both opponents.  The underlying sub plot is that that Motch brothers secretly want to call the election for their evil scheme of getting tax exempt backing to import cheap Chinese labor and factories into the center of their town.  Basically, the Motch brothers want to sell the town to the Chinese. 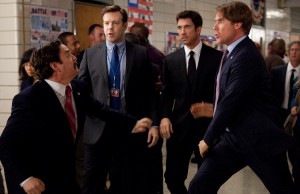 Ferrell and Galafianakis are funny, but the script or lack there of didn’t follow through on plot points, and just seemed like an arena for Ferrell and Galafianakis to improv one of their presidential impersonations.  This just didn’t work as a feature film.  I think it would have worked better as a short series on SNL or something like that.  To quote Marty Huggins’s campaign slogan, ‘The Campaign’ “is a mess.”  This despite a sex tape political ad in the film.