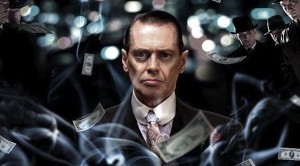 Atlantic City, New Year’s Eve, 1922: The Roaring ‘20s are about to begin in earnest. Despite a booming economy, alcohol is scarce and gangster violence is heating up. With his marriage to Margaret already on the rocks, Nucky Thompson faces the challenge of mending old relationships and encounters new competition from a hair-trigger gangster determined to siphon off his business.

From Terence Winter, Emmy® Award-winning writer of “The Sopranos” and Academy Award®-winning director Martin Scorsese, BOARDWALK EMPIRE is set in the 1920s during Prohibition, and chronicles the life and times of Enoch“Nucky” Thompson, the undisputed leader of Atlantic City. The Emmy®- and Golden Globe-winning drama series kicks off its 12-episode third season SUNDAY, SEPT. 16 (9:00-10:00 p.m. ET/PT), exclusively on HBO, followed by other episodes on subsequent Sundays at the same time.

In season two, Nucky married Margaret Schroeder to prevent her from testifying in court and took revenge on Jimmy Darmody for his role in a plot against him. But his hopes for smooth sailing were derailed when she signed away his highway windfall to the church. Meanwhile, agent Van Alden fled to Illinois to escape the feds with baby and nanny in tow.

While hosting a New Year’s Eve party for 1922-23, Nucky makes a resolution that does not sit well with Gyp Rosetti, a touchy gangster with a thirst for bootleg whiskey. Margaret looks to build on the Thompson endowment at St. Theresa’s Hospital, to her husband’s displeasure. In the absence of Jimmy and the Commodore, Gillian builds a new business while monitoring Richard’s mentoring of her “son,” Tommy. In Chicago, Al Capone is rankled by Irish mobster Dean O’Banion, and Van Alden stumbles onto a confrontation that could change his career path. 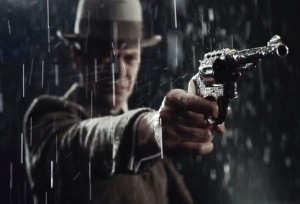 Mixing business with pleasure in New York, Nucky bristles at the collection tactics of Gaston Means, a “special investigator” with ties to Attorney General Harry Daugherty. At St. Theresa’s, Margaret is troubled when her altruism is met with resistance by both a patient and an idealistic doctor. Gyp extends his stopover in Tabor Heights, a town halfway between Atlantic City and New York, with an eye towards establishing a strategic foothold. Chalky and his daughter Maybelle (Christina Jackson) fail to agree on her future with Samuel (Ty Michael Robinson); Eli gets a new boss and faces new realities at home; a major liquor shipment takes an unexpected detour.

Disturbed by a recent nightmare and Billie’s absence, Nucky reluctantly joins Margaret to receive a high honor from the Church. Meanwhile, Gyp makes a deal with Nucky for a onetime liquor shipment, though the mobster’s longtime intentions remain very much up in the air. Van Alden regrets trying to socialize with his co-workers; Margaret takes her women’s-clinic pitch to a higher authority; Lucky and Meyer (Anatol Yusef) protect their investments; Richard sets the record straight with Mickey, and with Nucky.

In Sept. 2011, BOARDWALK EMPIRE received eight Emmy® Awards, the most of any program that year, in the 63rd Annual Primetime Emmy® Awards competition, including Outstanding Directing for a Drama Series (Martin Scorsese).