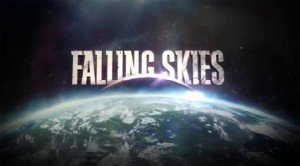 “Falling Skies is television storytelling at its very best, a powerful drama that’s told on both an epic scale and on a deeply personal level,” said Michael Wright, president, head of programming for TNT, TBS and Turner Classic Movies (TCM). “With all the memorable and surprising moments taking place during the second season of Falling Skies, we can’t wait to see what DreamWorks Television and Falling Skies’ terrific production team and cast members have in store for season three.”

Falling Skies, which currently airs on TNT Sundays at 9 p.m. (ET/PT), chronicles the devastating aftermath of an alien attack that has left most of the world completely incapacitated. In the months since the initial invasion, the few remaining survivors have banded together outside major cities to begin the difficult task of fighting back. Each day is a test of survival as citizen soldiers work to protect the people in their care while also engaging in an insurgency campaign against the occupying alien force, whose nature and purpose remains a mystery.

Noah Wyle stars in Falling Skies as Tom Mason, a former college professor and father of three, who has become an unlikely leader for the 2nd Massachusetts civilian resistance group. Moon Bloodgood also stars as Anne Glass, a pediatrician who works with the survivors to help them cope with the traumatic upheaval in their lives. Will Patton plays Weaver, a fierce military leader of the resistance and Tom’s commanding officer. The series also stars Drew Roy as Hal, Tom’s oldest son and a growing fighter in the resistance movement; Connor Jessup as Ben, Tom’s middle son who was rescued from the aliens and now uses his unique abilities to help the resistance; Maxim Knight as Matt, Tom’s youngest son, who wants to grow up ahead of his time; and Seychelle Gabriel as Lourdes, an orphaned pre-med student who helps Anne in the group’s makeshift medical clinic. Mpho Koaho and Peter Shinkoda play Anthony and Dai, two resistance fighters in the 2nd Mass.; Colin Cunningham is John Pope, the head of a gang of marauders called the Berserkers; and Sarah Carter is Maggie, a wary survivor from Pope’s gang.

Guest-starring this season are Brandon Jay McLaren (The Killing), who plays resident engineer and technology expert Jamil Dexter, and Terry O’Quinn (Lost), who will appear in this season’s final two episodes as Arthur Manchester, Tom’s mentor and former professor.

Following each week’s episode of Falling Skies on TNT, fans can head over the Falling Skies website – http://fallingskies.com – for the latest installment of 2nd Watch, a weekly online talk show hosted by Wil Wheaton (Star Trek: The Next Generation, Leverage). Each episode features discussions on the latest episode and interviews with special guests from the cast and crew, exclusive behind-the-scenes footage, fan questions, trivia and more.

TNT’s announcement that Falling Skies has been renewed for a third season comes just as the cast prepares to make an appearance at Comic-Con in San Diego. Series stars Noah Wyle, Moon Bloodgood, Will Patton, Drew Roy, Connor Jessup, Colin Cunningham and Sarah Carter, along with executive producer Remi Aubuchon, will join moderator Wil Wheaton for a panel session on Friday, July 13, at 4:30 p.m. (PT) in room 6BCF at the San Diego Convention Center. An autograph signing will follow at the Dark Horse Comics booth at 6 p.m. (PT). TNT has partnered with Dark Horse Comics on a number of Falling Skies initiatives, including a prequel comic book that preceded last year’s series premiere.

In its debut season last summer, TNT’s Falling Skies topped the charts as basic cable’s #1 new series of 2011. This year, the show is off to a strong start, averaging 5.9 million viewers in Live + 7. It has also scored 2.7 million adults 18-49 (L+7) and ranks as basic cable’s #1 drama for the summer-to-date in that key demo. The show has brought in 3.1 million adults 25-54, ranking it behind TNT’s Dallas as basic cable’s #2 summer drama. On the international front, Falling Skies premiered in more than 115 global markets last year, achieving hit status in the United Kingdom, Australia and Latin America, among others. Last year’s launch of Falling Skies also ranked as the biggest series premiere ever for TNT networks in Spain, Germany and Austria.