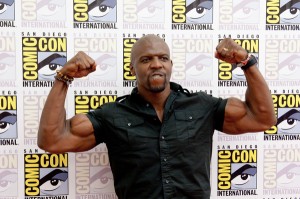 In a casting decision out of left field, action star and uproariously funny Old Spice commercial mascot, Terry Crews has just been cast in Aaron Sorkin’s new HBO series ‘The Newsroom’.  Crews will be introduced in episode 6 on July 29. He plays a bodyguard — and unofficial life coach — for Will McAvoy (Jeff Daniels). He’ll appear in five episodes.

This is great news.  I am a huge fan of Crews.  He was in the epic action film ‘The Expendables’ and will be in the upcoming sequel to that movie.  He was also the dad on the UPN comedy ‘Everybody Hates Chris’.  Not to mention he was the hilarious spokesperson for those amazing Old Spice commercials directed by Tim and Eric. Can’t wait to see him be a life coach on ‘The Newsroom’.