John Cameron Mitchell Working on a ‘Hedwig and the Angry Inch’ Sequel!!! 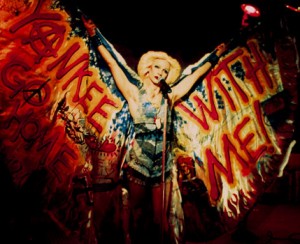 Writer Kevin Sessums recently sat down with John Cameron Mitchell (director and star of Hedwig and the Angry Inch), who told him he had just finished a first draft to a sequel to his 2001 musical ‘Hedwig and the Angry Inch’.  Stephen Trask is expected to return as the composer as well.  When Sessums asked what the sequel was about, Mitchell replied, “Let’s just say it’s something that could only happen to Hedwig — a phantasmagoria with dollops of brutal reality interwoven into its multi-media narrative.”  What a tease that is.

For all you fans of the Angry Inch, this is good news for you.  It’s been over ten years since the first story, and hopefully it won’t be too much longer till a second.  Meanwhile, Mitchell is finishing up the script and hopefully he won’t have a problem getting it greenlit for the stage and bg screen.