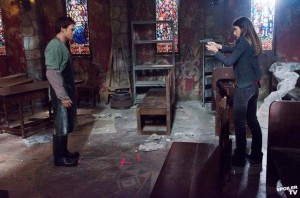 Michael C. Hall, and Jennifer Carpenter were at Comic Con this week and let a huge crowd in on what’s in store for the seventh season of ‘Dexter’.  We saw the Miami serial killer busted by his own sister.  The video below shows the opening minutes of the new upcoming season as Dexter is caught by his sister, the homicide detective Debra.

Dexter is seen carving up the Travis character. After trying to talk his way out of the situation, Dexter seems to lose his cool when Debra goes to call in the incident. That’s when the screen went black and the crowd went wild. I imagine this will be a dream sequence, but who knows.  There are some new cameos for the season and this wil be the next-to-last season for Dexter, so I imagine nothing is out of bounds.  Enjoy the clip.