After a few years of getting a softer side of Oliver Stone, Savages brings the director back to his ultra violent, drug induced, sex crazed, and savage side.  Based on Don Winslow’s novel, Savages tells an intense tale of drugs, sex, and betrayal.  I really missed this side of Oliver Stone.  I’ve been hoping for a film that can be put in the same cookie jar as Natural Born Killers, Platoon, and U Turn.  Instead, we have received films like Wall Street 2: Electric Boogaloo, W., and World Trade Center.  By far not his best work nor interesting.  So the big question is, “Did Oliver Stone deliver the goods on his return to a more sadistic film?”

Unfortunately, it’s not the answer you were hoping for.  While there are some very good elements to Savages, its three main actors and story takes a faming nose dive right into the ground.  In it’s 129 minute runtime, I had hoped for something a little better and satisfying.  Instead I had to settle for something that felt thrown together at the last minute and ultimately was served up as a complete mess.

The film centers on California’s most successful, high-end independent pot growers and dealers with their free-spirited girlfriend.  Chon and Ben make up our pot dealers.  Chon (Taylor Kitsch) is an ex-marine who served in Iraq and is a hard-as-nails guy who would more prefer to 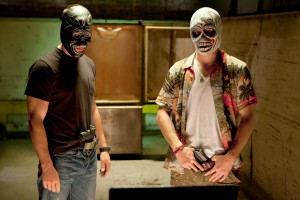 shoot first and questions later.  Then there is Ben (Aaron Johnson: most recognized from the film Kick-Ass) who is a hippie who is involved in charities around the world and whose goal is to make the world a better place.  The girlfriend to both guys is Ophelia, or O (Blake Lively) as she calls herself, is a beautiful girl who whose sole purpose in life is to keep her two boyfriends happy.  O also serves as our narrator for the film and has sex with both guys within the first ten minutes of the movie.

Needless to say the two guys have made a fortune with their top notch weed and their friendly attitudes.  That is until the Mexican cartel wants a piece of the action.  The Mexican drug queen Elena (Selma Hayek) has put the squeeze on Chon and Ben and has her minions set up a meeting with them to get their business.  Chon and Ben are up for selling their business and getting out of the drug business, but Elena wants them to stay in the drug game to use not only their recipes for golden weed, but their contacts, business practices, and branding.  When Chon and Ben refuse, Elena sends her right-hand-man Lado (Benicio Del Toro) to kidnap O and guarantees Chon and Ben that the worst will come to O if they don’t follow orders.

Chon and Ben decide to only put one thing on their mind.  Save O by any means.  Chon and Ben use their friends to help ensure their safety by going to that next level of brutality and ultra violence in taking on the Mexican cartel.  Add to that a DEA agent by the name of Dennis (John Travolta), who is playing three sides of the game.  Can two men take on a drug lord and her army?  You’ll have to see the film to find out.

One of the film’s problems are its main three actors.  Aaron Johnson, Taylor Kitsch, and Blake Lively.  I actually love Aaron Johnson’s work, 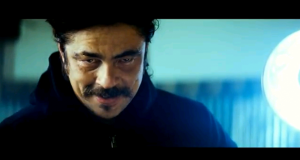 especially in Kick-Ass, but in this role, I felt he was way too young for.  Johnson, Kitsch, and Lively are all significantly younger than the other actors in this film, and it seems like Stone wanted pretty young faces, rather than good actors sans Johnson.  Taylor Kitsch is just about as awful as it can get in acting.  I don’t see how Kitsch has become such the action star as of recent.  He was awful in John Carter, even worse in Battleship, and just pure terrible in Wolverine: Origin.  It’s no different here.  There is no emotion and when he tries to yell and get serious, I laugh.  Acting lessons for a solid year should cure the problem.  Black Lively is also a drag to watch.  She is beautiful yes, but she seems to be under a dazed and hypnotic trance through the whole film.  She never raises her voice or acts scared when she is tortured or captured.  She either phoned it in, or was on drugs the entire time.  Overall, those three actors could not hang with Benicio, Hayek, or Travolta.

Another problem I had with the film was it’s failure of a third act.  Savages had a really solid two acts in the film, but in the last 20 minutes or so, everything fell apart really fast.  I don’t want to spoil anything, and I’m not, but it didn’t work on film, nor did it make any sense to the overall goal of the story.  It was a let down and completely ruined the film.  I expected better.

Let’s move onto the aspects of Savages I did like.  Benicio, Hayek, and Travolta were all amazing in this film.  Benicio plays a sadistic bad guy 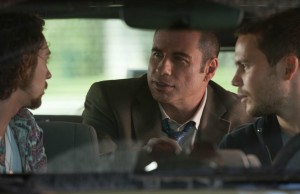 who every time was on screen, I wanted to see his demise, however I wanted to see what he did next.  He was mesmerizing to watch on screen.  Hayek played the drug queen very well.  She handled the role with fierce brutality and you definitely did not want to cross her, even when she was vulnerable from missing her teenage kids.  Then there was Travolta, who played an over-the-top DEA agent who was as corrupt as they come.  He was animated, funny, and stole every scene he was in.  There was also a few actors I noticed in the film who played small parts including Emile Hirsch, Demian Bichir, and Joel David Moore.  They were all great in their roles.

Another aspect I enjoyed was Stone’s return to his trademark editing style.  There were tons of creative visuals in the form of different color hues in specific moments, solarizing the film, the alteration of time an color to accentuate emotions.  Think back to Natural Born Killers with all of its insane visuals.  There is a bit of that in Savages and it is a nice welcome back for Stone in that regard.

Savages on a technical aspect is great.  The sound, score, music, and cinematography are all top notch.  It really looks and sounds flawless.  But, there were some poor decision-making during the making of this film that savagely killed it.  I hope next time, Stone can conquer his third act.