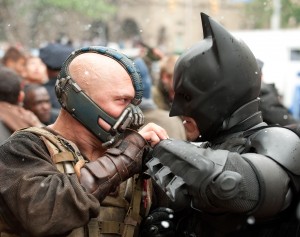 This is definitely not the type of new I want to share on a Friday, but it needs to be said.  About 20 minutes into the midnight showing of ‘The Dark Knight Rises’ at a Century 16 Theatre in Aurora, CO, a gunmen opened fire in the theatre on the audience and killed 12 people and injured 38.

The suspect, James Holmes, 24, of Aurora, was caught by police in the parking lot of the Century 16 Movie Theaters, nine miles outside Denver, after police began receiving dozens of 911 calls at 12:39 a.m. MT. Police said the man appeared to have acted alone. Witnesses in the movie theater said Holmes crashed into the auditorium through an emergency exit about 30 minutes into the film, set off a smoke bomb, and began shooting. Holmes stalked the aisles of the theater, shooting at random, as panicked movie-watchers in the packed auditorium tried to escape, witnesses said.

“The suspect throws tear gas in the air, and as the tear gas appears he started shooting,” said Lamar Lane, who was watching the midnight showing of the movie with his brother. “It was very hard to breathe. I told my brother to take cover. It took awhile. I started seeing flashes and screaming, I just saw blood and people yelling and a quick glimpse of the guy who had a gas mask on. I was pushed out. There was chaos, we started running.”

Holmes was wearing a bullet-proof vest and riot helmet and carrying a gas mask, rifle, and handgun, when he was apprehended, according to police. Holmes mentioned having explosives stored, leading police to evacuate his entire North Aurora apartment complex and search the buildings early this morning.

We are still trying to figure out why this happened and as of now the police are at the suspects apartment searching for clues.

This is horrible news.  The worst news.  Victim’s ages range from 3 months old through 45 years of age.  My thoughts go out to the victims families and people who are hurt.  This might change the way we see movies.

Aurora, Colo. – Aurora Police are investigating a shooting at the Century 16 Movie Theater, located at 14300 E Alameda Ave, involving approximately 50 victims with at least 12 confirmed dead. On July 20, 2012, at about 12:39 a.m., police received numerous calls of the shooting. Officers arrived on scene moments after the first calls and arrested one party at the rear of the theater.

Police were told the suspect “appeared” at the front of one of the theaters, threw some type of gas or explosive device and started shooting.

When the suspect was arrested, police recovered one rifle, one handgun and a gas mask. A third gun is still inside the theater. The suspect is an adult male Aurora resident in his early twenties. He offered no resistance when he was arrested. At this time, the police have no evidence that any additional suspects were involved other than the person arrested.

The Police Department can confirm that 12 persons are deceased, with the bodies of 10 victims still at the crime scene inside the theater. At least two more victims died at area hospitals. The Police Department previously released a preliminary number of 14 dead, but only 12 can be confirmed at this time. Approximately 50 total persons were shot, including the deceased.

Victims were transported to at least six area hospitals. Many were rushed immediately to hospitals in police cars by responding officers. The injured and dead include a wide age range. The conditions of the injured also vary, with some suffering very serious wounds.

The Federal Bureau of Investigation is assisting in this investigation. Officers and deputies responded from almost every local police and sheriffs’ department in the metropolitan area.

Police are using Gateway High School, located at 1300 S. Sable Blvd., as a meeting location for family members seeking to reunite with loved ones.

Aurora Police will hold a press conference at approximately 11:00 a.m., Mountain Standard Time, to provide further information. The location will likely be outside the theater where the shooting occurred but the location may be changed.

KEEP IT HERE for more updates.