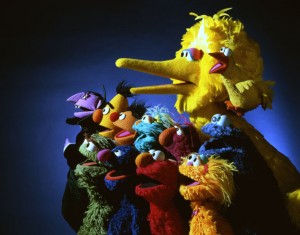 20th Century Fox has picked up the movie rights to the lovable children’s show, ‘Sesame Street’  to bring a new story to the big screen.  ‘Sesame Street writer Joey Mazzarino has been asked to write the script with Shawn Levy producing.  I think they took their cues from Disney as the return of ‘The Muppets’ was a huge success.  Maybe, Fox thinks ‘Sesame Street’ can make more money too.

Shawn Levy directed ‘Night at the Museum’ and ‘Real Steel’.  There are two previous ‘Sesame Street’ films.  There is ‘Follow That Bird’ from the 80s and that Elmo film they did a few years back.  Let’s hope this new ‘Sesame Street’ film is more like the recent ‘Muppets’ film and less like a film strictly for five year olds.  I wonder how many cameos will be in this film and if Flight of the Conchords will do the music?  Let’s hope so.