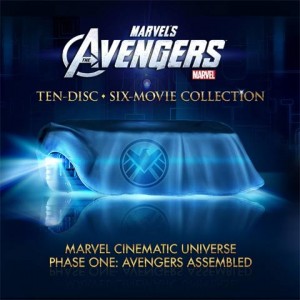 We all know that since Marvel’s first film, ‘Iron Man’ in 2008 was all a marketing ploy for ‘The Avengers’.  Now that the ‘Avengers’ has been in theaters for several weeks now and that the bluray for ‘The Avengers’ has been announced already, we have all wanted to know if there was going to be an all out ultimate edition of all the Marvel films in one set.  Well that day has come.Marvel has announced the Marvel Cinematic Universe Phase One box set.  It’s called Avengers Assembled which consists of 10 discs of all Marvel films from ‘Iron Man’ thru ‘The Avengers’.

Now, with that “collectible packaging”, it seems like the set will come in the briefcase that Nick Fury holds the cosmic cube in.  Maybe the discs will be in the cosmic cube.  Who knows?  I’m thinking it will be something similar to the Blade Runner briefcase bluray.  If it is like that, I’ll be impressed, but since that was years ago, they might upgrade the packaging.  The price tag is $153.30 for the whole set, or $25.55 per film.

That being said, I’ll be interested to see who buys this, since as of now, they are just the re-packaged blurays and 3D blurays that have already come out.  They just added the cool packaging.  Hopefully, there will be new features or extras on these, because if there isn’t I don’t see the point in purchasing this, unless you don’t own any of the films already.