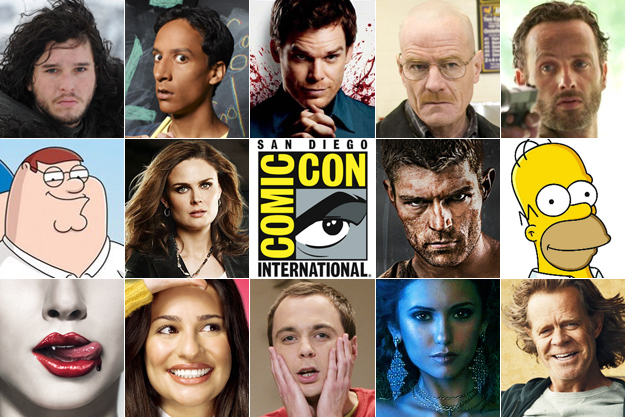 HBO series True Blood and Game of Thrones are confirmed for panels and autograph sessions, and Cinemax series Strike Back will have a panel and a screening at Comic-Con International:  San Diego 2012. Below is panel information on the three HBO/Cinemax series.  Panel times will be released soon.  Expect live coverage of the True Blood and Game of Thrones panels, at HBO Connect (hbo.com/connect) and #sdcctruebie #sdccgotfan.  For Strike Back, fans can go to cinemax.com/strike-back.

* Game of Thrones panel in Hall H will be moderated for the second year by George R.R. Martin.  Martin is the author of the bestselling fantasy book series ÒA Song of Ice and Fire,Ó which the HBO drama is based on, and also serves as a co-executive producer on the series.  The panel will include: Carolyn Strauss, executive producer of ÒGame of Thrones,Ó and cast members (in alphabetical order):  Alfie Allen (Theon Greyjoy), Emilia Clarke (Daenerys Targaryen), Lena Headey (Cersei Lannister), Kit Harington (Jon Snow), Michelle Fairley (Catelyn Stark) and Richard Madden (Robb Stark).  Executive producers David Benioff & D.B. Weiss will not be in attendance, as they are in production in Belfast, Northern Ireland.

* Season 2 of Strike Back will make its world premiere for fans at Comic-Con 2012 prior to the new seasonÕs debut on Cinemax in August. The show follows stealth counterterrorism unit Section 20 as they span the globe to stop potential threats.  Stars Philip Winchester (Sgt. Michael Stonebridge), Sullivan Stapleton (Sgt. Damien Scott) and new cast member Rhona Mitra (Rachel Dalton) will appear on a panel moderated by HitFix TV critic Alan Sepinwall, which will take place in Convention Center Room 6DE.

The cast will attend this special screening for fans and answer questions afterwards.  The first two episodes of the new season will screen for the first time.  The preview screening is open to attendees with 2012 Comic-Con badges and seating is on a first-come, first-serve basis.