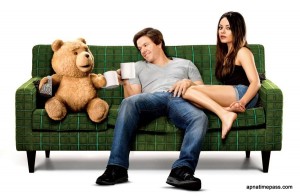 ‘Ted’ is hilariously funny.  I didn’t expect it to be as humorous as it was, but I busted a gut from start to finish.  I’m not a huge ‘Family Guy’ fan. so I admit, I was a bit apprehensive to watch a feature film written and directed by Seth MacFarlane.  I was quite surprised as to how warm and witty it was.  After the first 15 minutes or so of seeing an animated teddy-bear come to life, I really didn’t see it as a teddy-bear, but rather an actual person.  MacFarlane captured a genuine and heartwarming film with an ultra raunchy and vulgar kick at every turn.

Let’s get one thing straight here.  ‘Ted’ is not for young kids.  The humor is not about farts, burps, or toilet humor.  It’s more drug, sex, booze, and rock n’ roll humor with a teddy bear who uses the word “fuck” every 10 seconds and can throw one hell of a party with all the hookers, celebrities, and drugs you can get.  It’s very rare nowadays that a film can genuinely make you laugh almost non-stop.  And with this being MacFarlane’s directorial debut, he hit the mark spot on.

In the first scene of the film, we hear a narration as if we are being read a bedtime story as we see several young kids playing in the snow at Christmas time.  They celebrate their friendship by beating up the neighborhood Jewish kid, who in the middle of this beating all yell to the unpopular kid who walks by to get lost.  Even the jewish kid yells “Get Lost”.  That unpopular kid makes a wish that night for his teddy-bear to come to life.  Well, that wish is granted.  Come to find out this newly alive teddy-bear, named Ted, is seen by everyone and even becomes a celebrity for a while, going on talk shows, posing for the cover of magainze, and so on.  Years pass and the unpopular kid, John Bennet (Mark Wahlberg) are in their 30s, and their friendship is still as strong as ever.  They spend their days smoking pot, drinking, and watching old sci-fi films. 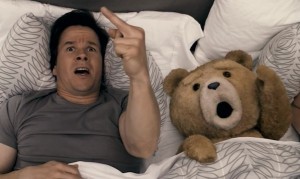 John lives with his beautiful girlfriend Lori (Mila Kunis) of four years and she is as cool as you’d want her to be.  She makes vulgar jokes and is not above smoking and watching sci-fi films either.  However, she wants her beau, John to get his life together and move on to become an adult.  This means that Ted has to move out.  This happens after John and Lori come home after their four year anniversary to find Ted sitting on their couch with five hookers and a legendary game of Truth or Dare’.

Ted moves out while John tries to grow up from his constant pot smoking and dead end job.  From here on out, it’s a similar romantic comedy that we have all seen before with a splash of a kidnapping thriller added in for good measure.  In several moments of ‘Ted’, the film plays out like an episode of ‘Family Guy’ complete with tons of movie references and quick flashback cutaways to show previous events.  There is a treasure trove of cameos in ‘Ted’.  You’ll recognize pretty much all of the voice actors from ‘Family Guy’ as well as some other great and laughable cameos.

Above, I stated that MacFarlane is a huge fan of sci-fi and cult films.  Well, one of the big overall story arcs of ‘Ted’ is the film ‘Flash Gordon’ and Sam Jones himself has a pretty hefty role in the film playing, well, himself.  It’s one of the funnier cameos I have seen in a long time.  As for Wahlberg and Kunis, they are brilliant in their roles.  They are very likable characters.  But the star of the movie is ‘Ted’.  That little animated bear shines and owns every part of the movie screen.  The CG on the bear itself is out of this world.  It’s some of the best visual FX in a while and can compete with any of the mega budget sci-fi films of recent years.  Not one time did the bear look fake.

‘Ted’ is hilarious from start to finish.  You will walk out of the theater with your jaws and sides hurting from laughter.  All hail ‘Ted’!
-Bryan Kluger

You can even pre-order the bluray below.