‘The Amazing Spider-Man’ is the best Spider-Man film to date.  I can’t believe I’m actually saying that either.  It was just less than a decade or so, that the original Spider-Man film came out.  So how can they be rebooting this franchise and why would they?  I think there are several answers to that question. One might be as simple as making more money.  The last three Spidey films have made tons of money. The opportunity came to make another film, and of course Marvel said “Yes” to that, therefore more money in the pockets of Marvel.  Another reason might be, is that the third Spider-Man film was such a terrible milestone in filmmaking, and acted as a “what not to do” with a superhero franchise, that Marvel thought it would be a good idea to just reboot the series.  And yet, even another reason might be, is that Marvel wanted to go the route of DC Comics and make an edgier more realistic superhero film, similar to what DC Comics did with the Batman franchise.

I’ll be the first to say that I am a huge Sam Raimi fan.  And up until now, I thought his Spider-Man films (just the first two) were as good as they were ever going to get.  But after seeing Marc Webb’s vision of the web-slinger, I prefer this new film to the Raimi versions.  For quick refernce, Webb directed ‘(500) Days of Summer’, which is his only big credit.  That is until now.   I was also pretty uneasy about a remake of Spider-Man so soon.  I was thinking it would need at least another 20 years before they needed to remake the film.  And to get a romantic comedy director like Webb (no pun intended) to direct the web-slinger didn’t sound to wise either.  But it seemed the perfect choice after viewing.

Now we all know the story of Spider-Man for the most part, and if you saw the previous three Spidey films (especially the first one), you’ll know the story.  Webb did a lot of similar things with his Spider-Man film that Raimi did, but I think Webb did everything better.  We are told Spider-Man’s origin story again, his troubles in high school with bullies, Parker learning his new powers and learning the right way to use them, and we even get a very similar scene that culminates to Uncle Ben’s fate.  But with Webb’s edgier vision, the whole story along with the characters, emit truer and greater emotions than the original.  Peter Parker has had a very difficult time growing up without his parents and having to live with his uncle and aunt have made him more of an outcast.  This moment in his life takes a turn for the worst with the fate of his uncle.  We see his raw emotion spill out and feel for him. 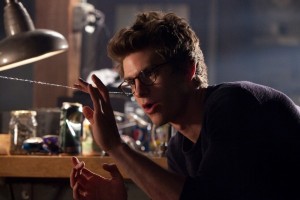 Unlike Raimi’s Spider-Man films, Peter Parker is not the happy-go-lucky Spider-Man we have seen recently.  Instead, he is a troubled and haunted soul who mourns his dead loved ones.  He struggles to talk to his peers and girls. He just wants to be accepted.  Andrew Garfield plays Peter Parker/Spider-Man perfectly.  I prefer Garfield to Tobey Maguire.  Sorry Tobey, but Garfield’s performance was just incredible.  Not only did he show us how tortured Peter Park is, but Garfield is an excellent stuntman.  He really kicked some ass.  Emma Stone did a phenomenal job as Gwen Stacy.  She just owned that role every time she was on screen and she was completely likable throughout the whole film.  I can’t say that for Kirsten Dunst.  Then there is the amazing Rhys Ifans who plays Dr. Curt Connors/ The Lizard.  Ifans is such a remarkable actor and was the perfect villain for the lizard.

The Lizard is by far the scariest villain in any recent Marvel Comics film.  Every time the lizard was on screen, I tensed up. The lizard wastes no time in owning Spider-Man.  Spidey gets tossed around a lot in this film.  The visual FX were pretty decent.  I’ll admit, I noticed a few scenes where the CG and FX were lacking.  I don’t think I saw an early cut, but it just seemed amateurish.  I expected a little bit more attention to detail in that department.  Sally Field and Martin Sheen play Peter’s Uncle Ben and Aunt May,  They are the warmest people and have unconditional love for Peter.  I got a bit misty eyed watching Sheen talk to Garfield about his responsibility.  It was done flawlessly.  And Dennis Leary plays Gwen’s dad, Captain Stacy and brings his own brand of humor and greatness to the screen.  Perfectly cast.  Oh, and don’t forget to watch out for Stan Lee’s cameo.  It’s his best yet. 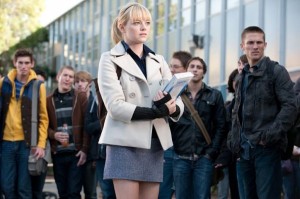 I want to bring up something funny I noticed from ‘The Amazing Spider-Man’.  Embeth Davitz plays Peter Parker’s real mother.  Davitz was the female lead in’Army of Darkness’, which was directed by Sam Raimi, who directed the first three Spider-Man films.  But even more interestingly and maybe even funnier, is that there is a very small, but pivotal role in the film, played by C. Thomas Howell.  Who is C. Thomas Howell?  I suggest looking him up on IMDB, but for those of you who can’t wait, Howell was in a little film called ‘E.T.’  He was one of the kids that was playing Dungeons and Dragons at the beginning, and was one of the kids at the end who flew on their bikes with E.T.  Howell was the kid who pulled the blue ski mask over his face before that famous bike ride.  Much like Spider-Man pulls his red mask over his face.  It thought that was really cool. I’m not geeking out or anything.

If you are a fan of watching Spidey swing through the city, then you will really enjoy ‘The Amazing Spider-Man’.  I loved getting the first person view of Spider-Man web-slinging through the city, especially on the IMAX screen.  Webb takes it to that next level with the imagery and Spider-Man’s surroundings.  It truly is spectacular.  The 3D aspect of the film wasn’t anything to write home about.  I don’t feel it was necessary.  There were a couple of scenes where the depth was really striking, such as the scenes where we see Spider-Man who appears small on top of the large buildings of the city.  It made me feel how tall the buildings were and how much he had to climb and swing up.

Normally, I’m not a huge fan of reboots, but ‘The Amazing Spider-Man’ delivers the goods on every level.  It’s flawlessly acted, has great character development, terrifying action sequences, one hell of a scary villain, and some genuine heart warming moments.  This is the best Spider-Man film so far and I look forward to more.  And don’t forget to stay a little while during the credits, for there is an extra scene that might tell you what is to come.  ‘The Amazing Spider-Man’ gets a HUGE recommendation from me.