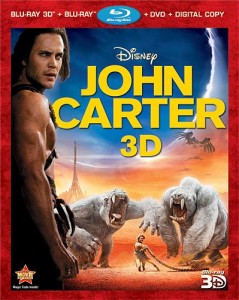 In my opinion, ‘John Carter’ is one fun ride.  I really think the executives over at Disney had no idea how to market this movie.  Of course, it showed during its theatrical run, because it didn’t make near enough as everyone thought it would.  ‘John Carter’ cost around $200 million to make and is a story of epic proportions.  The ‘John Carter’ 3D Bluray is one to own if you love action adventure films.  Don’t let the critics persuade you not to like this film, because in fact, you will enjoy it.

I rather enjoy the whole universe and story of John Carter. It was imagined by Edgar Rice Burroughs and the first book, which was the first film was titled ‘A Princes of Mars’. And Andrew Stanton directed the film, which he previously directed ‘Wall-E’, and ‘Finding Nemo’.  I think one of the reasons ‘John Carter’ didn’t do well, was that its main star was mostly unknown and a HORRIBLE actor.  The actor I’m talking about is Taylor Kitsch who plays the title character, John Carter.  Kitsch was in the recent ‘Battleship’ film and is utterly awful in that film as well.  With a terrible actor and a piss poor marketing campaign, it’s no wonder ‘John Carter’ didn’t get the respect it deserved.

The film itself follows ‘John Carter’ who lives on Earth and is a gunslinging cowboy in the western days, and after a series of events, discovers something otherworldly.  His body is quickly transported to Mars or is it is called by the alien locals, Barsoom.  Once on Mars, Carter discovers he has superpowers that make him super strong and jump long distances.  He befriends one of the local aliens called Tars Tarkas (voiced by Willem Dafoe) and the alien race accept ‘John Carter’ as one of their own in due time.  Let’s add to that a Martian Princess, a large scale war, and a couple of evil guys who want to destroy the universe, and you have ‘John Carter’.  In it’s 2 hour and 10 minute run time, we get large scale battles, intelligently designed aircrafts, and tons of new species.  The film doesn’t flow as well as others, but I still think it was a fun ride and look forward to a sequel.  But who knows if that will ever happen.

The video in ‘John Carter’ has both 2D and 3D options as well as the DVD version.  The film is presented in 2.40:1 aspect ration in that glorious 1080p HD.  The colors are rich and shine brightly while the blacks are deep and inky.  The depth in this glossy HD transfer is top notch.  The video really stands out with showing the 1000’s characters at once and seeing the great depth of space being used.  The CG aliens are lifelike and look amazing. Youwill be able to distinguish scars and wrinkles in their skin.  I did not notice any aliasing or scratches.However, the 3D version of this film was sub par.  While the depth that it created looked good, the rest of the film was flat, dull, and uninteresting.  The scenes that took place at night seemed to be the worst, where the space and depth vanished.  There really wasn’t any pop out effects that happened throughout the film and I think the better way to watch ‘John Carter’ is in the 2D version.  Other than that, it’s a decent video presentation.

The audio of ‘John Carter’ far surpassed the video.  It’s demo quality for sure.  It has a DTS-HD 7.1 audio mix and sounds incredible.  The entire speaker set up got a full work out with the ambient noises of the alien planet, the swords clanking, and bullets flying by — this audio transfer will please anyone.  The dialogue was crystal clear and covered all dynamics.  The explosions and intense battle scenes rumbled the room with the bass and sounded ultra realistic.  The score was also full and good without ever drowning out the dialogue or sound effects.  This lossless mix is stunning. 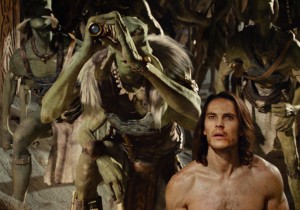 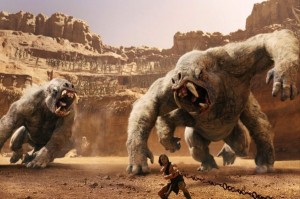 The ‘John Carter’ Bluray is a winner in my book.  The video and audio is top notch, although the 3D version is not as good as the 2D version.  The extras were good, but I wanted longer versions of them, since this was such an epic film on screen and off screen.  The bluray set is currently $24.99 which I think is a decent price for it. It’s normally $50.00.  You will get 4 discs containing the 3D Bluray, 2D Bluray, DVD, and Digital Copy.  If it goes higher than $25.00, I’d wait till the price drops.