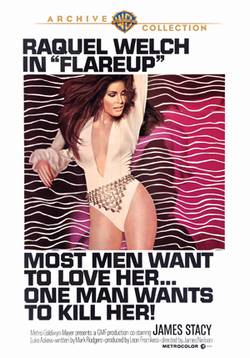 Racquel Welch is a goddess. In ‘Flareup’, you can see why Welch was a leading lady in so many films.  She was a sex symbol and a surprisingly very funny and gifted comedy actress.  It’s very easy to watch Welch on screen and become hypnotized by her beauty, that you completely forget the title of the film you are watching.  Then you snap out of it and think, “WOW, this movie and Welch were amazing.”  This film does exactly that.  Sadly, ‘Flareup’ was one of those long lost forgotten films, that most of you never heard of.  And thank the geniuses over at the Warner Archive collection for finally releasing this on DVD.

Welch plays a stripper named Michele who becomes the object of disdain of  man who blames her for breaking up his marriage.  This man is out to kill her.  He is an obssessed stalker that follows her from Las Vegas to L.A.  We meet Michele (Welch) in Vegas with a couple of her exotic dancer friends.  One of the exotic dancer’s husbands comes up to them as they are laying out poolside and shoots one of the girls dead.  This psycho starts shooting wildly at the other girls as he blames them for his divorce.  The two escape, but not for long as the guy tracks them down again and kills the other stripper, leaving only Michele alive.  From here, Michele escapes and heads for L.A. as this crazed psycho will stop at nothing to kill her.  In it’s almost 100 minute run-time, ‘Flareup’ is a bit campy here and there, but on the whole, it;s a fun thrill ride.  Welch just owns this movie and is mesmerizing to watch every time she is on screen.  For you guys and girls out there who were hoping for a topless Welch, you will have to look elsewhere, as this film was re-rated to PG-13.  Don’t get me wrong, there is a topless exotic dance scene, but you’ll see more on HBO these days.  Overall, ‘Flareup’ is a classic and fun gem of a film that was lost in the vaults long ago, and it’s great to see this pop up again.  For those fans of 1960’s/70’s films, this is a must have as well as the rarity of the film, there are not many prints of this available and is virtually forgotten in the realm of Racquel Welch films.  This particular DVD is even made to order, so you know, you just can’t go to the local DVD store and pick this up.  If you’re a fan of Welch or these films, this is a no-brainer.  Pick it up. 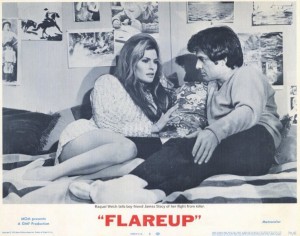 As I said above, this is a made to order DVD.  It’s not the best quality you can get by any means.  The video is presented in its original 1.75:1 aspect ratio, which was the way it was released in theaters.  It has been in enhanced for 16:9 televisions.  ‘Flareup’ looks surprisingly decent for how lost it has been for years and how dirty the print is.  Don’t get me wrong, there are tons of problems with the picture.  It has tons of dirt, flaws, scratches, and just general wear and tear on the print.  But, I think that adds to the 1960’s feel and grittiness of the film.  The color and detail were actually sharper and brighter than I expected it to be.

The audio is a Dolby Digital mono audio mix.  It gets the job done, but I always prefer stereo or a 5.1 mix.  I just lose a lot of the cool audio that we could have with it being surround.  There are no optional subtitles nor are there any alternate language tracks, but with this film, why would you need them.  You can totally watch this on mute, and know what exactly is going on.

‘Flareup’ is a hell of fun movie.  And Welch is nice to look at.  It’s silly and campy in parts, but it delivers the goods on all levels.  It will leave you satisfied and fulfilled.  I wish this had a better audio track and some more extras. I would just kill for a Racquel Welch interview about this film.  How awesome would that be?  Amazon is currently selling the DVD for about $20.00, where the WB Shop is selling it for a few dollars less.  Like I said, this is made to order, but this price is too damn high for the lack of quality and extras.  I’d wait till you can score this for under $10.  But for you hardcore fans, you’ll  pick it up for the offered price.