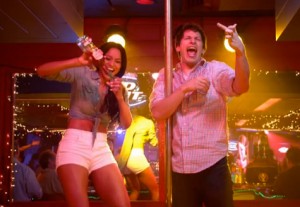 We all still love Adam Sandler.  He gave us great characters in Billy Madison, Happy Gilmore, and his many iconic roles on Saturday Night Live.  But at some point, Sandler started making lazy, unfunny, and obnoxious films and characters.  It made me not want to see any of his films.  There were a few brief moments of greatness from him over the past several years in his more dramatic roles, but when it came to his comedies, Sandler and his films have become a joke.  His last film, ‘Jack and Jill’ was one of the worst films to come out in the last twenty years, with his previous comedies not too far off from that.  That being said, Sandler’s ‘That’s My Boy’ is his welcome back party. A welcome back to the great comedic genius he was once known for.

That’s right, folks.  ‘That’s My Boy’ is actually funny.  And it’s just not funny, it’s astoundingly hysterical.  Sandler is back to the funny man we once knew him as.  But, with this film, he ditches the PG-13 comedy for a solid-R rated comedy that is one of the raunchiest films I have seen in a long time.  I’ll admit, that prior to seeing ‘That’s My Boy’, I was convinced that I was going to hate it, but after the credits rolled down the screen, my jaw hurt with laughter and I looked to my friends to see that they had the same experience.  I think Sandler finally got the memo that his old style of unique comedy wasn’t working and that the “Judd Apatow” adult comedies are what’s popular and funny right now.  I’m glad he went this direction.

‘That’s My Boy’ starts out in 1984 with 13-year old Donny Berger (Justin Weaver) as he has an affair with his math teacher, Miss Mary McGarricle (Eva Amurri Martino). Unfortunately, the two are discovered while they are having sex, and the teacher ends up pregnant.   Their affair is covered by every national media outlet, and Donny is offered a bunch of money for his life story while Miss McGarricle is sentenced to thirty years in prison. The court decides that Donny should care for the child once it’s born.

Fast forward 25 years, and we see the adult Donny Berger played by Adam Sandler. He is a walking calamity, having blown all of his money on drugs, booze, and women.  Donny gets in trouble for tax evasion and will face going to prison if he doesn’t raise $42,000.  To avoid jail, Donny plots to reunite with his son Han Solo Berger (Andy Sandberg) (AWESOME name, huh?).  His son left home as soon as he turned 18, changed his name to Todd, and avoided all contact with Donny.  Donny learns that his son has become a successful hedge fund manager and is about to marry into a wealthy and well-connected family.  Donny, hoping to score some cash, shows up and tries to make up for being a terrible father and the years they were apart.  Todd wants no part of this, having already told everyone that both his parents previously died in an explosion.  But little by little, Todd warms up to his dad throughout the film and the two of them step into some hilarious situations. 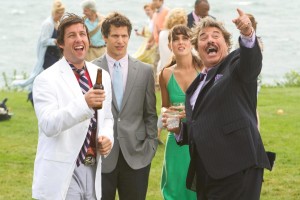 Is ‘That’s My Boy’ insanely dumb?  Does it have enough pee jokes to last for two films?  Of course it does.  But, what makes this film better than the other Sandler films of past years is the chemistry between Sandler and Sandberg. It’s amazing.  First off, they look like they could actually be father and son, and secondly, their comedic styles play perfectly off one another.  Another factor that makes ‘That’s My Boy’ great, is that it relies more on the raunchy rated R-humor, rather than the more family-oriented cutesy humor that Sandler has shown in the past.  The film will make you laugh as much as any Apatow film would.

One of the biggest things I did NOT enjoy about ‘That’s My Boy’ was Sandler’s voice and dialect he used through the whole film.  While I admit, it kind of grew on me; there was no need for his raspy Boston accent.  It really didn’t go with the rest of the film, but I guess it really separated the rest of the characters from Donny in that Donny is absolutely insane and crazy whereas the rest of the characters are straight-laced.  And of course the film is very predictable–but hey, it’s an Adam Sandler film.  But, unlike most of his other comedies, this one has a lot of heart.

‘That’s My Boy’ has enough bad language to last three films and enough nudity to get you through next week.  Like I said, it’s crude, lewd, and racy.  But, it is a hilarious and (at times) heartwarming film.  I really hope Sandler stays with this type of comedy because I think he has talent. In the past it was just being used poorly.  I can say with excitement that, ‘That’s My Boy’ is one of the funnier films of the year. I know, it shocked me saying that, but it’s true.  Welcome back, Sandler.  Welcome back.