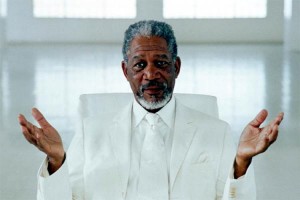 We’ve talked about this film before.  ‘Last Vegas’ would follow four older guys in Vegas for a bachelor party where Douglas and De Niro fall for the same girl.  The studio is hoping to sign on De Niro soon, then the rest of the casting will follow.  This sounds a lot like ‘Grumpy Old Men’ mixed with ‘The Hangover’ which could be solid gold.

Directed by Jon Turteltaub (National Treasure, While You Were Sleeping) from a screenplay by Dan Fogelman (Crazy, Stupid, Love, Tangled), LAST VEGAS is a comedy about four old friends who decide to throw a Las Vegas bachelor party for the only one of them who has remained single.

Freeman is set to play Archie Clay, an army veteran, who looks to escape the watchful eyes of his son and daughter-in-law and accompany his best friends on a trip to Vegas.

The ensemble comedy is being produced by Laurence Mark (Julie & Julia, Dreamgirls) and Amy Baer. Good Universe’s Nathan Kahane will executive produce along with Lawrence Grey. Matt Leonetti will co-produce.

Morgan Freeman is represented by CAA and his legal is handled by Sloane, Offer, Weber and Dern.