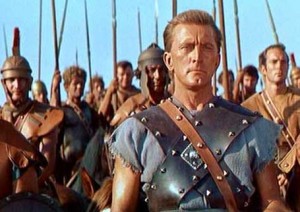 Kirk Douglas will be joining actor Liam McIntyre and producer Steven S. DeKnight for a ‘Spartacus’ reunion at the Academy of Television Arts and Sciences later this month.  They will discuss the cultural impact of ‘Spartacus’ then and now.

This could be amazing.  If only Stanley Kubrick were alive to be a part of or witness this, although he probably wouldn’t want to be a part of it.  Douglas said, “I made a film about freedom at a time when freedom was in jeopardy and a blacklist had been in effect in Hollywood for more than a decade.  There are parallels in today’s political climate, which is why a hero like Spartacus still resonates.”

I’m hoping for some good info from all guests.  And judging from Douglas’ appearance at the Oscars a couple of years ago, I can expect a wild and funny night.