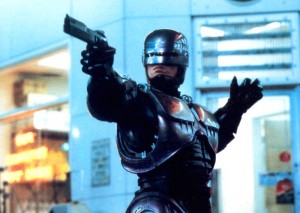 Gary Oldman has just signed on to star in MGM’s remake of ‘Robocop’.  If you didn’t know that ‘Robocop’ was being remade, well now you do.  Blasphemy, I know.  Joel Kinnaman will play Alex Murphy/Robocop with Jose Padilha directing.  Kinnaman is best known for his role on ‘The Killing’ on AMC.  Padilha has directed a few documentaries along with ‘Elite Squad’.  Needless to say, I have no hope for this film.

“Kinnaman (The Killing) plays the title character, a cop named Alex Murphy who is brought back from the brink of death and turned into a cyborg police officer.  Oldman will play Norton, the scientist who creates Robocop and finds himself torn between the ideals of the machine trying to rediscover its humanity and the callous needs of a corporation.”  The production is eyeing a September shoot in Toronto and has a tentative release date of summer 2013 according to THW.

Last month, I was at the 25th anniversary screening of the original ‘Robocop’ for the Dallas International Film Festival. Peter Weller was one of the guests and when asked about remake, he was not too happy about it.  Weller compared the original ‘Robocop’ to ‘Casablanca’ in how good and deep it was.  And he is convinced that this new version will only be about action and violence.  I agree with him.