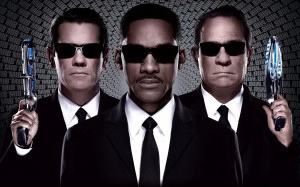 When Men in Black came out in 1997, we got a very different and original script showcasing one of Hollywood’s most popular actors alongside one of Hollywood’s most respected actors as an elite group of government agents that keep aliens under control on Earth.  Five years later, someone slapped together a sequel that made no sense.  It featured a Jar-Jar Binks-like alien, and had us shaking our heads in disappointment.

Now, ten years after the last sequel, and fifteen years after the original, the trilogy is complete, and wraps up the whole package very well.  M.I.B.3 is a time traveling tale where Will Smith goes back in time to meet a young Tommy Lee Jones.  Essentially, this means that Tommy Lee Jones said “I’m definitely too old for this shit,” but that’s totally cool, because Josh Brolin plays an incredibly likeable and hilarious young version of Jones.

Will Smith, on the other hand, is only getting older, and it kinda shows.  He becomes the young, reckless, super cool government agent again, but he does it as a man in his 40’s.  He’s a little less “Fresh Prince” and a little more “old news.”  But despite the slight awkwardness of having a character that never really matured in fifteen years, Smith recreates with Brolin so much of the same chemistry that he and Jones had in the first film.  This third installment works, because it feels a lot like the first film, and it actually surprises you with some unexpected heart (provided by notorious emotionalist, David Koepp’s screenplay.) 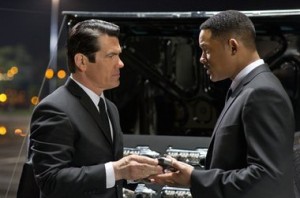 The film’s biggest flaw is, as it has been in each film, are that the antagonists are dumb.  Giant cockroaches, Laura Flynn Boyle as some pointless alien, and now with ‘Boris the Animal’, which is a Randy Savage wannabe alien that makes no sense, but at least it’s not the focus of the film.

Overall, this is a much better follow up to MIB than was MIB II.  It’s a fun and sweet way to close up the franchise, and though it was never a power house franchise, MIB 3 feels like a nice final chapter.