I had never even heard of ‘Halls of Anger’ until I popped it into my blu-ray player so I decided to watch the trailer first (the trailer is available on the main menu of the disc, see Extras below).  From the trailer, you get a look at what this movie is going to be about, but it was actually a lot more interesting than I though it was going to be.

The movie begins with an African American English teacher, Quincy Davis (Calvin Lockhart), going about his normal routine as a teacher at an all white school during the 70’s.  All of the student there like and respect him, especially for his basketball playing skills.  The principal pulls Quincy into his office where there are two members of the school board and offers him a promotion to assistant principal at a troubled school elsewhere in the city.  The other school is a traditionally all black school but because of redistricting there are going to be 200 white students this year, and 3000 black.  At first Quincy turns down the position but the one school board member takes him aside and talks him into it.  So Quincy goes to the new school and is introduced to the other teachers who all give him different advice on how to handle the situation, for the most part they are just happy to let the students do whatever because they are “unteachable”.

Except for one other teacher, Janet MacLachlan (Lorraine Nash) who also really wants to help the kids but is tired of no one else trying and plans to quit at the end of the year. The new students meanwhile, lead by Doug (a very young Jeff Bridges) try and fit in but get bullied by the black students, lead by J.T. (James A Watson Jr.) especially once they discover that the white kids are much smarter than there black peers.  There are several fights and a lot of yelling which takes up a good portion of the film.  While this is all going on, Quincy has also realized that the black students aren’t so good at school and decides that, more important than race, he needs to teach these people something!  So, he starts working on some alternative methods of instruction – including reading a trashy romance novel out loud with some of his students who are only interested in sex and allowing one student to paint a mural instead of take an English test.

After one particularly violent fight that results in a student being expelled the principal decides that Quincy’s methods aren’t working and that they need to return to the rules.  Quincy is upset and storms out telling Janet he is leaving.  After a walking montage Quincy realizes that he really does want to help the kids and so he goes to Janet’s apartment in the middle of the night and we are left with the impression they hook up.  We are next treated to a scene that makes almost no sense in the context of the movie.  One of the white students, a girl, is brushing her hair in the locker room when several black students jump her and rip all of her clothes to pieces.  I think they just wanted to have boobs in the movie?  I looked at the DVD case after the film and I realized it was rated R for “an assault involving nudity”, I laughed a little.

Anyway, when Quincy returns to school the black students have surrounded Doug and he is fighting with J.T..  Quincy breaks up the fight but then the black students begin to riot.  The principal arrives on scene and threatens the kids telling them to go back inside, and when they don’t he calls the police.  Quincy jumps up and starts talking to them about how important an education is but they aren’t listening to him, until the police arrive.  They ask Quincy if he needs help and he says no which earns their respect and they all return to class, except the two troublemakers.  J.T. says he will go back inside, not for Quincy’s reasons but for his own.  Doug gets angry but Quincy reminds him how important it is to do difficult things and to graduate from high school and finally Doug agrees. 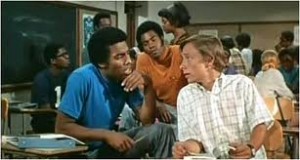 Before the movie even starts there is a title card which reads, “This film has been manufactured from the best source material available”.  Uh-oh, I thought. However, it wasn’t that bad, but the color was very soft throughout the movie and there were occasional black scratches from the original film during the presentation.  ‘Halls of Anger’ is presented in anamorphic widescreen aspect ratio.  I found it amusing that the cigarette burns were still visible in the corner of the screen at what would have been the reel change.  None of this made it unwatchable by any means but I had really expected them to clean it up a little better.

The audio was also iffy.  It has a mono audio mix, so only the front speakers work.  I turned the volume up to about 65 (out of 99) on my TV and there were still portions of the dialogue that I couldn’t catch.  On top of that, with the volume so high there was a constant hissing in the background.  Pretty disappointing on this front.  It sounded amateur, honestly, like when your friend makes a movie and just uses the front facing microphone built into their camera.  The soundtrack is by Dave Grusin (who did the theme music for ‘The Goonies’.) 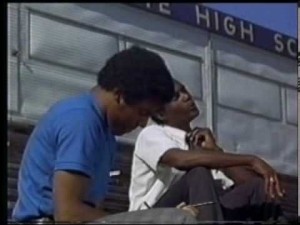 Theatrical Trailer (SD, 3 min) – The trailer was in pretty bad shape, whatever film they transferred it off of had a hard life as it was filled with black lines from beginning to end.  Overall, though, the trailer sums up the movie pretty well.

I was actually kind of surprised by this film, especially after watching the trailer.  It was interesting for two big reasons to me.  One, it was the opposite of most of the other movies like this where there are a couple of black students and a ton of white students.  We never think about that when we think about the racial tension of the time.  Two, race was a subtext in a lot of ways.  Certainly it was the driving force in the film, but it was more importantly about a teacher in a tough spot trying to teach kids who didn’t want to learn.  Overall, this movie isn’t a must own by any stretch, given its $20.00 price point, but it was interesting and if that is a period of American history you enjoy, than it would be worth it to pick this up.