Firstly, I just want to point out that I enjoy British comedy.  It just has such a different feel than most of what we get on this side of the pond.  So, when I got my hands on this, I was understandably pretty excited despite not knowing anything about the film.  After reading the back of the case and watching the trailer (included on the title screen of the DVD) I was even more excited, it just sounded so absurd!  And… it was.

Basically, the movie is set in England following World War 3, a war which lasted all of 2 and ½ minutes (including the time taken to sign the peace treaty).  Of the several million people living in England before the blast, only 20 are known to have survived.  Primarily we follow the story of Penelope (Rita Tushingham) and her family, Mother (Mona Washbourne), Father (Arthur Lowe) and her lover Allan (Richard Warwick) as they deal with the trials of surviving in post-apocalyptic London.  Along the way we are introduced to a bizarre assortment of characters including Captain Bules Martin (Michael Hordern) who is particularly proud of his “Defeat of England” medal, awarded for failing to save Buckingham palace from the bomb and Lord Fortnum (Ralph Richardson) who does, indeed, become the Bed Sitting Room for which the film is named.  For 90 minutes comedy ensues and by the end we are left with the vague feeling that life is looking up for the vagabonds still alive in London. 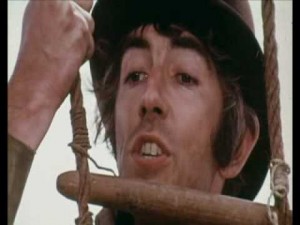 For a film made in 1969 (and only on DVD) this was pretty high quality.  As with my last review we are presented before the film with a title card indicating that “ This film has been manufactured from the best source material available.”  Thankfully, however, the source material wasn’t bad There were a few points at which there were noticeable dirt and scratches but I was looking for them.  Nothing to get in the way of enjoying the film.  The colors were muted but the film is mostly set against drab, gray backgrounds so they still provide a fair pop on screen.  The movie was originally filmed in 1.66:1 but was presented as 16 x 9 1.85 letterbox.

The audio was my biggest issue with this DVD.  My grandfather was British, I enjoy other British comedy, I generally have no problem understanding people with a British accent.  I honestly could barely understand (and sometimes just couldn’t understand) what was being said on screen in the film.  One of the key contributors to this was that the background music was much too loud throughout the film and the dialogue far too quiet.  This, combined with the fact that the film was in mono combined to make the film very difficult to watch.  I had to re-watch several scenes that I couldn’t understand and, at the end of the movie, when I looked it up on wikipedia I was still surprised by the little things I had missed.   I would have gotten a lot more out of it if they had included subtitles. 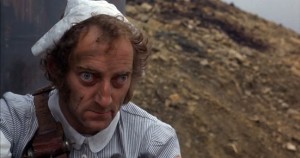 Theatrical Trailer (SD, 2 min 30 sec) – The trailer looked pretty good and provides an idea of what you are getting into.  The sound on the trailer was actually much better than that of the rest of the film.  Check out the trailer below, if you like it; you’ll probably like the film.  But…

As I said from the beginning, I enjoy British comedy and I really wanted to enjoy “The Bed Sitting Room”.  But I just couldn’t, not on this release anyway.  What I understood I liked quite a lot, but with the audio the way it was this DVD was difficult to watch.  If you are comfortable with thick British accents and like British comedy than you should definitely check this out.  Otherwise, stay away and wait for the blu-ray which will hopefully have a better audio track.