Bryan’s Review of ‘The Dictator’!!! 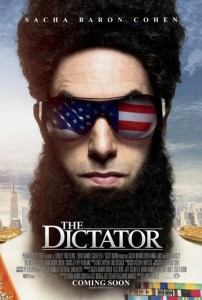 Sacha Baron Cohen returns to the big screen with another instant iconic character — Aladeen, ‘The Dictator’, and every religion, culture, and nationality is fair game for Cohen’s politically incorrect humor.  Cohen’s over-the-top offensive humor is not for everyone, but if you like tongue-in-cheek humor that plays off of every stereotypes and prejudice imaginable, you’ll be laughing hysterically as Cohen keeps crossing the line and reveling in his inappropriate jokes.  Cohen hit a home run with ‘The Dictator’, and I can easily say that this film is funnier than his Ali G, Borat, and Bruno characters combined.

In the ‘The Dictator’, Cohen abandons his familiar documentary-style format for a more traditional narrative.  This was a good decision, allowing ‘The Dictator’ to play out on a much grander scale.  With his previous documentary-styled films, the other people in his films were unscripted and giving their honest reactions to Cohen’s fictitious characters. This required Cohen to play off of their reactions, which in turn created an automatic constraint on the films. But here, Cohen takes control of the wheel; and with a fully scripted film, Cohen has unlimited time and ways to set up his scenes and jokes. Cohen also had a much larger budget for this film. His other films were made for less than $20 million each, while ‘The Dictator’ was produced for over $60 million.  The extra budget was put to good use by incorporating big set productions, more cameos, and more time spent filming and tightening the script.

The film follows Prince Aladeen (Sacha Baron Cohen) who is the dim-witted, child-like dictator of the fictitious country of Wadiya.  Aladeen lives in a massive mansion in the middle of the dessert with armed guards at his side at all times.  His right hand man is Tamir (Ben Kingsley, yes that Ben Kingsley). Tamir, to no avail, tries to convince Aladeen to be a more righteous dictator. He even goes so far as to secretly deport all of the people that Aladeen sentences to death to New York City, where most of them go on to lead productive lives. When Tamir has had enough, he manages to deport Aladeen to New York, replacing him with a look-a-like dictator.  Aladeen, who is freshly shaved and dumped in New York, spends the rest of the film trying to gain back his dictatorship and convince other of his true identity. 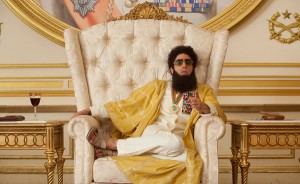 Comparisons will be made to his character Borat, since they both come from third world countries and know little about the USA.  They pick up America’s way of doing things as they go along.  But Aladeen is far funnier than Borat.  Cohen makes his Aladeen character so childlike that we feel compassion despite his atrocious philosophies and actions.  Cohen also goes to great efforts to have Aladeen grow as a character and yet never be fully redeemed.  A redeemable Aladeen isn’t funny.

Cohen is the master at offensive comedy. While many will be offended by this film (there was a time when the entire audience was laughing at rape and pedophile jokes), you’ll find it difficult to hate the movie. Cohen’s film is brilliantly low-brow satire, and if you don’t take it too seriously, you’ll find yourself laughing the whole way through.  So far, this is one of the funnier films of the year.