Bryan’s Review of ‘Sound of My Voice’!!! SEE THIS MOVIE!! 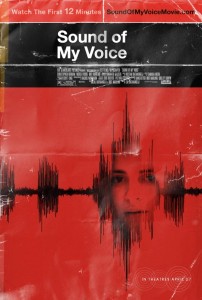 Zal Batmanglij’s ‘Sound of My Voice’ put a complete spell on me after only the first few minutes of watching.  This is Batmanglij’s first feature film and is supposed to be the first of a planned trilogy.  If this is what we can expect from Batmanglij and Brit Marling, then count me as a fan-for-life.  Not in a long time has a film captivated me, leaving me wanting more so badly.  ‘Sound of My Voice’ will definitely leave you sitting on the edge of your seat and wanting more!

The film is masterfully unsettling from beginning to end, as the audience consistently grasps to define character motivations and sometimes sanity.  The film begins in the back seat of a van, where we see Peter (Christopher Denham) and Lorna (Nicole Vicius) blindfolded and handcuffed. They are driven to a house, made to shower, and required to change into all-white linens.  They do this willingly, and after revealing that they know the secret handshake, they are given access to the basement of the house.

They wait in the basement with several other similarly dressed people until Maggie (Brit Marling), a pretty, blonde enters the basement breathing through an oxygen mask. On her lower leg is the image of an anchor and the number 54. She explains that the anchor means she is a traveler, and the number 54 means she is from the year 2054.  She claims she is from the future and tells everyone in the basement that she is there to save them from an impending doom. 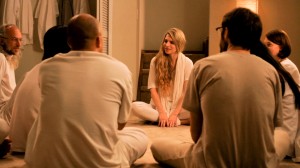 Despite Maggie’s stated reason for time travel, the film does not address the impending apocalypse nor do we see Maggie or her disciples plan to save the world.   Instead, this film is more simply about faith in an unverifiable mythology.  After the first meeting with Maggie, we learn that Peter and Lorna are not actually would-be-members of the cult. In fact, they are aspiring documentarians, who have been working tirelessly to infiltrate Maggie’s cult and expose her as a fraud.  It is unclear whether Maggie knows of their secret motive. We are exposed to the cult alongside Peter and Lorna.

Watching this film is like putting together a complex puzzle. It is told in several sections with on-screen titles displaying “Part 1, Part 2, etc”.  Each section reveals another piece of the puzzle as we learn more about Maggie, Peter, and Lorna.  We, the audience greedily consume this information in an attempt to find our footing and define the characters. This ever-evolving perception of characters is flawlessly executed, and it creates a thrilling movie-going experience.

In the beginning, we are skeptical of Maggie’s mythology, rationalizing it as either manipulation or insanity. But our perception evolves over the length of the film, and we end up wanting and beginning to believe.  Maggie does predict certain events will occur with uncanny accuracy, but what is even more convincing is Maggie herself.  She is kind, insightful, charismatic, and mesmerizing. She is as loyal to her followers as they are to her, and she seems to be of sound mind and lacking ulterior motives.

The title of the film, ‘Sound of My Voice’ references how mere words can create new reality.  In that sense, it truly is the sound of Maggie’s voice that makes you want to believe.  Brit Marling shines throughout this film.  Just like in her recent film ‘Another Earth’, she captures her audience with her natural allure of warmth.  My only complaint is that the movie ends with one of the biggest cliffhangers in recent memory. We get a big build-up and are about learn new clues about Maggie’s story and–CUT TO BLACK.  I just hope that the two sequels get made in a timely fashion.  I can’t wait to find out what happens.  ‘Sound of My Voice’ gets my highest recommendation.