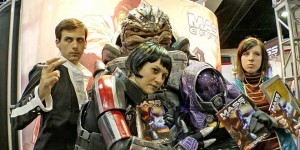 Morgan Spurlock hits a home run with his new documentary, Comic-Con Episode IV: A Fan’s Hope.  Spurlock’s previous documentaries are: Super-Size Me, Greatest Movie Ever Sold, and the FX series 30 Days.  In all of these documentaries, Spurlock conducts different social experiments, always putting himself in front of the camera as the guinea pig.  With Comic-Con Episode IV: A Fan’s Hope, he is not seen on camera but rather follows several different people as they attend the one, the only, San Diego Comic-Con.

I’m sure most of you know what Comic-Con is, but for those who have been under a rock for the past decade or so, San Diego Comic-Con is the largest media convention in America.  The convention takes up the entire San Diego convention center and lasts four days.  Over 150,000 people attend each year.  Held every July in San Diego, it is where movie fans, television-series loyalists, comic book readers, and gamers gather to see new releases, attend panels of their favorite writers, buy limited-edition toys or comics, and learn what new films and television series are being green-lit.  Not only that, but Comic-Con gives fans the opportunity to interact with industry professionals and possibly get their work critiqued by those professionals.  The documentary also interviews a wide variety of celebrity directors, writers, and actors who talk to us on camera on their experiences and their take on all that is Comic-Con.

Spurlock captures several different aspects of what goes on at Comic-Con through the eyes of very different people.  Many viewers unfamiliar with Comic-Cons may mistakenly assume this film documents a modern-day carnival freak show or a mere convergence of super geeks.  But as this film aptly shows, the San Diego Comic-Con has become more main stream, appealing to a much wider audience–each person having a very different reason for attending. 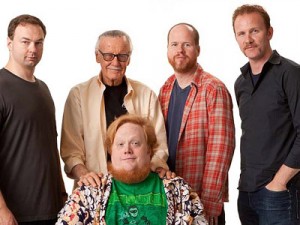 Before I go any farther, I have a confession to make. I actually filmed my own Comic-Con documentary in 2003, and I’m the sole proprietor of a comic book store that has exhibited at one of these conventions.  As such, I already had my own preconceived opinions about “the con.”  And although this film certainly brought back fun memories (such as seeing the 500 pound guy in a spandex spider-man suit or attending panels for Firefly and having the fans go insanely wild for Director Joss Whedon), what is different about this film is also, what makes it so great. In Spurlock’s film, you get to see the convention through the eyes of an aspiring artist, a dedicated cosplayer (person who dresses in costume to conventions), a hardcore collector of toys and comics, a comic book store owner, and a sweet nerdy couple who are very much in love.

We follow these characters for months before the convention, realizing their motivations and aspirations, and watching them prepare and strategize to achieve their goals.  The aspiring artists work up their portfolio and strategize on how to get their artwork seen by the big studios and other artists/writers in hopes of securing a job or at least get some constructive criticism. The young female cosplayer spends endless hours sewing and assembling a highly-detailed costume that can compete in a competition with the other costumes worn at the Comic-Con (ones that are fully moveable, light up, have robotic ligaments, and easily rival professional film costumes).  The thirty-year-old toy collector researches which toys will be available and obsessively hunts them down at the Comic-Con so that he can add to his extensive collection. The comic book store owner deals with money problems when a potential customer doesn’t follow through with purchasing a book worth over $1 million dollars. And the adorable geeky couple visit the convention every year, but this year the boyfriend secretly plans to ask his girlfriend to marry him in front several thousand people at the Kevin Smith panel. 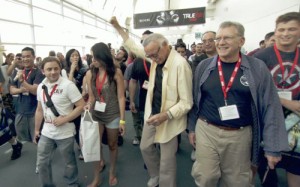 Your first instinct may be to point and laugh at these people for being nerdy or geeky, but they are so endearing and have such a passion for this event and culture that you can’t help but fall in love with each of them. On top of all of this human interest, the celebrity cameos are plenty and dispersed throughout the film.  For example, we see Eli Roth, Seth Rogen, Joss Whedon, Kevin Smith, and Seth Green. One of my favorites was seeing Stan Lee walking through the convention.  His presence is awe-inspiring and he is genuinely the nicest guy in the world. Kevin Smith and Joss Whedon also add very colorful commentary to the whole experience.  You’ll be laughing so hard, your stomach and face will hurt by the end.

Comic-Con Episode IV: A Fan’s Hope is a truthful documentary on geek culture and the passion for Comic-Con and shows that these fans can come and be with others like themselves and not feel embarrassed of their geeky passion.  They feel at home. The film is very entertaining and charming.  After viewing this film, you might find yourself in line at your next comic convention.