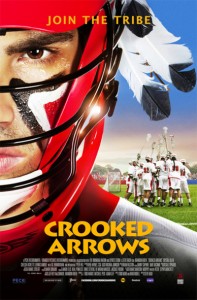 ‘Crooked Arrows’ might be the first feature length narrative film on the fastest-growing sport, Lacrosse.  ‘Crooked Arrows’ was inspirational and an underdog story at heart.  Now I know we have seen our fair share of underdog films, such as; ‘Rocky’, ‘Underdogs’, and ‘Remember the Titans’, but  where ‘Crooked Arrows’ differs is that it shows a sport not only from its physical aspect, but also its spiritual, artistic, and historic background.  While there is an overabundance of cheesy heart-felt moments in this film, ‘Crooked Arrows’ has enough character and inspiration to rise above recent sports films.

‘Crooked Arrows’ takes place in upstate New York where an Indian tribe struggles to balance preserving their heritage, culture, and land with the demands of operating a second-rate casino.  The tribe’s agreement with ‘the white man’ requires them to expand their building plans in one month.  Now that the time has come for them to start construction, the tribe starts to appreciate the problem with the expansion – that it will encroach on what little land and culture they have left.

Part of the Indian culture that has been lost over the years is lacrosse. Lacrosse was actually invented by Native Americans, and they would sometimes play the game for days on end and sometimes to the death in honor of their gods.  But today, the members of the tribe no longer know how to play the game well.  The high school students are all members of their school’s lacrosse team, but despite their rich history in the sport, the students do not see themselves as a team, are reluctant to play, and have never won a game. That is, until a new coach is put in charge of the team. 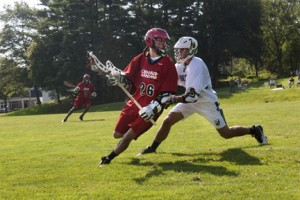 Joe Logan (Brandon Routh), the casino’s owner, starts to train the lacrosse team.  Joe’s father was the tribe’s former lacrosse coach. His father not only trained Joe how to play the game, but led him on a spiritual journey of self-discovery where, through the sport, Joe gained an appreciation for the history and culture of his people once again.  Joe trains his new team of high school students the same way. Not only do they learn to play the game right, but they become acquainted with their ancestors, traditions, and original language.  This makes them a better team and better people who can, of course take on the evil uppity preparatory schools.

‘Crooked Arrows’ doesn’t really change the sports film genre much.  It is a little sappy at times, and some of the acting besides Routh is sub-par.  But, its charming, family-friendly story makes ‘Crooked Arrows’ a solid film.  What ‘Rocky’ did for boxing, ‘Vision Quest’ did for wrestling, and ‘Remember the Titans’ did for football –‘Crooked Arrows’ does for Lacrosse, Native American history, and friendship.  It gets people excited and learn about the sport, lacrosse.  I’ve never played lacrosse, but after seeing ‘Crooked Arrows’, I might pick up my first lacrosse stick.