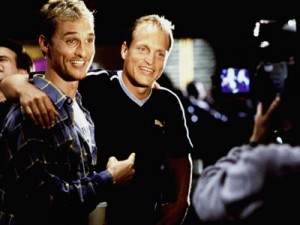 A buddy cop drama series starring Matthew McConaughey & Woody Harrelson is in the works currently for a cable channel.  The project is title ‘True Detective’ and will consist of eight episodes.  Nic Pizzolatto will write the series with Cary Fukunaga (Jane Eyre) directing the entire series.

‘True Detective’  is descried as an elevated serial narrative with multiple perspectives and time frames. It centers on two detectives, Rust Cohle (McConaughey) and Martin Hart (Harrelson), whose lives collide and entwine during a seventeen-year hunt for a serial killer in Louisiana. The investigation of a bizarre murder in 1995 is framed and interlaced with testimony from the detectives in 2012, when the case has been reopened. The concept is for the 8-episode first season to resolve the mystery at hand, with subsequent seasons using same structure but new characters and story.

Matthew McConaughey & Woody Harrelson worked on ‘EdTv’ together and ‘Surfer Dude’, while both actors have done television before.  Harrelson was on’Cheers’ and McConaughey was in a few episodes of ‘Eastbound and Down’ according to Deadline.

This has badass written all over it and it is known that both Matthew McConaughey & Woody Harrelson are very good friends in real life.  This has the potential to be an excellent series.  We will fill you on which network it goes to as well as more casting when it becomes available.