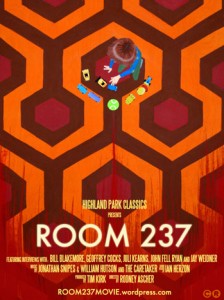 Good news everyone.  IFC Midnight announced today that the company is acquiring North American rights to director Rodney Ascher’s highly acclaimed documentary ROOM 237 which concerns the theories surrounding and within Stanley Kubrick’s film THE SHINING. The film, which was produced by Tim Kirk and scored by Jonathan Snipes and William Hutson, recently played at the 2012 Sundance Film Festival. IFC Midnight plans to release the film theatrically this year.

In 1980 Stanley Kubrick released his classic horror film, THE SHINING. Over 30 years later, viewers are still struggling to understand its hidden meanings. Loved and hated by equal numbers, the film is considered a genre standard by many loyalists, while other viewers dismiss it as the lazy result of a legendary director working far below his talent level. In between these two poles, however, live the theories of ardent fans who are convinced they have decoded THE SHINING’ssecret messages regarding genocide, government conspiracy, and the nightmare that we call history. Ascher’s ROOM 237 fuses fact and fiction through interviews with the fans and scholars who espouse these theories. Ideas of five devotees of the film with wildly different ideas about its true meaning arebraided together in a kaleidoscopic deconstruction of the horror classic.

Jonathan Sehring, President of Sundance Selects/IFC Films, said: “At this year’s Sundance Film Festival, everywhere you went you could hear people talking about ROOM 237 which is one of the most wild, entertaining and unexpected films of the year. Rodney Ascher has made a brilliantly constructed film that will bring joy to cinephiles and the curious around the world. We look forward to working with him, producer Tim Kirk and our friends at The Film Sales Company to get this film out to its already excited audience.”

Noted Ascher: “I’m thrilled that this movie is going to be able to reach a wide audience and is in the hands of people who really get it and have released some of my favorite films of the last couple years. I’m also very comforted to discover that we’re not alone in finding these ideas endlessly fascinating.”

IFC Midnight is a sister division to IFC Films and Sundance Selects, and is owned and operated by AMC Networks Inc.