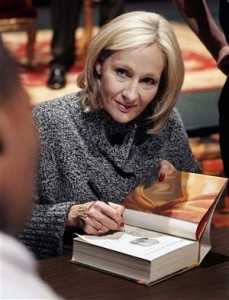 The books is called ‘Casual Vacancy’ and will cater to adults.  The book has a scheduled release of September 27th, 2012 and I expect hordes and hordes of fans standing in line to get the first book.  Rowling describes the book as  “blackly comic” and for adults.  The book runs about 480 pages and will be available in hardback, audio CD, and ebook formats.  I anticipate a movie studio (Warner Bros.) picking up the rights to this book soon once its done.  Here is Rowling’s synopsis of her new book:

When Barry Fairweather dies unexpectedly in his early forties, the little town of Pagford is left in shock.

Seemingly an English idyll, with a cobbled market square and an ancient abbey, what lies behind the pretty façade is a town at war.

And the empty seat left by Barry on the parish council soon becomes the catalyst for the biggest war the town has yet seen. Who will triumph in an election fraught with passion, duplicity and unexpected revelations?