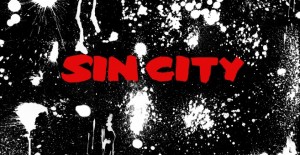 I wrote a story last month on Robert Rodriguez talking about his plans for the much awaited ‘Sin City’ sequel and ‘Machete’ sequel.  You can read that story HERE.  Well, today Dimension officially announced the ‘Sin City’ sequel which will be titled, ‘Sin City: A Dame To Kill For’.  This is going to be great.  Frank Miller’s story is fantastic and might be my favorite one of the series.  The other stories are being kept under wraps and casting is expected to start next week with most of the original cast returning.  Shooting should being this summer and 3D is a big possibility.  I’m also curious to see if Tarantino will guest direct a scene or two like he did in the first film.

Filmmakers Robert Rodriguez and Frank Miller, along with producer Alexander Rodnyansky, have announced that production will commence on the highly anticipated sequel to 2005’s Sin City, entitled Sin City: A Dame To Kill For. The film will be produced by AR Films and Quick Draw Productions, financed through AR Films U.S and released domestically by Dimension Films.

“The first question I am always asked is “When will you make another Sin City? ,” said Rodriquez. “I have wanted to re-team with Frank Miller and return to the world he created since the day we wrapped the original, but have felt a duty to the fans to wait until we had something truly exceptional that would meet and exceed what have become epic expectations. A Dame To Kill For will certainly be worth the wait.”

Sin City creator, screenwriter and co-director Frank Miller said, “The first Sin City knocked out audiences who had never seen anything like it before. Robert Rodriguez and I are going to shake things up and deliver a ferocious film experience that is going to go even further than the first.“

The script and details of the film’s story have been kept tightly under wraps. Casting will begin next week, with many of the original cast expected to return. The film, a Quick Draw Production, will be produced by Rodriguez and producing partners Aaron Kaufman and Iliana Nikolic; and by Alexander Rodnyansky and Sergei Bespalov and Stephen L’Hereux. Miller, The Weinstein Company’s Harvey and Bob Weinstein and Miramax’s Adam Fields will act as executive producers. Sin City: A Dame to Kill For was developed by Frank Miller based upon his graphic novel, with a screenplay by Frank Miller and Academy Award winner William Monahan (The Departed). The film is expected to begin production this summer at Rodriguez’s Troublemaker Studios in Austin, Texas.

Alexander Rodnyansky said, “We are delighted to continue our relationship with Robert Rodriguez and Quick Draw Productions. It is a rare opportunity to produce and finance a film with the high profile and enormous fan base of the Sin City franchise. AR FIlms will be managing worldwide sales of Sin City: A Dame to Kill For, as well as Robert’s Machete Kills at the Cannes Film Festival in May.”

The original Sin City was brought to the screen by Rodriguez and Miller and released by Dimension in 2005, and proved to be a landmark step forward in filmmaking, breaking ground with immersive green screen to create its iconic stylish look. The first film, released on April 1, 2005, grossed over $160 million (US) worldwide and is a consistently strong home video and television performer.

“Audiences have been clamoring for Sin City 2 with Robert and Frank for a long time and trust me, it will be worth the wait,” said Bob Weinstein, co-chairman of The Weinstein Company. “This will be my 11th collaboration with Robert in 16 years and he’s become a great friend. I look forward to continuing our long lasting relationship and partnering on more projects in the future.”

About AR Films
AR Films was founded by Alexander Rodnyansky in 2009. Through AR Films, Rodnyansky controls one of the biggest film licensing and distribution corporations in Central and Eastern Europe, A-Company; the Russian film production company Non-Stop Production; a major distributor of independent films in Russia, Cinema Without Frontiers; and the most important film festival in Russia, Kinotavr.

Rodnyansky, a renowned documentary director, is also one of the most successful movie producers in Russia. His films have received critical acclaim from the leading international film festivals; the latest – Elena, directed by Andrey Zvyagintsev — received a Special Jury Prize at the 2011 Cannes Film Festival’s Un Certain Regard, as well as more than a dozen international awards, including four Golden Eagle Awards from the Russian National Academy of Film. Elena most recently screened in the Spotlight section at Sundance 2012, and will be released in the U.S. in May.

About Quick Draw Productions
In 2010, writer/producer/director Robert Rodriguez launched Quick Draw Productions, a development, production and financing company, giving the filmmaker capabilities to develop and produce his own media projects across film, television, gaming and interactive platforms while closely controlling the creative process.

About The Weinstein Company and Dimension Films
The Weinstein Company (TWC) is a multimedia production and distribution company launched in October 2005 by Bob and Harvey Weinstein, thbrothers who founded Miramax Films in 1979. TWC also encompasses Dimension Films, the genre label founded in 1993 by Bob Weinstein, which has released such popular franchises as SCREAM, SPY KIDS and SCARY MOVIE. Together TWC and Dimension Films have released a broad range of mainstream, genre and specialty films that have been commercial and critical successes. TWC releases took home eight 2012 Academy Awards®, the most wins in the studio’s history. The tally included Best Picture for Michel Hazanavicius’s THE ARTIST and Best Documentary Feature for TJ Martin and Dan Lindsay’s UNDEFEATED. THE ARTIST brought TWC its second consecutive Best Picture statuette following the 2011 win for Tom Hooper’s THE KING’S SPEECH.

Since 2005, TWC and Dimension Films have released such films as GRINDHOUSE; I’M NOT THERE; THE GREAT DEBATERS; VICKY CRISTINA BARCELONA; THE READER; THE ROAD; HALLOWEEN; THE PAT TILLMAN STORY; PIRANHA 3D; INGLOURIOUS BASTERDS; A SINGLE MAN; BLUE VALENTINE; THE COMPANY MEN; MIRAL; SCRE4M; SUBMARINE; DIRTY GIRL; APOLLO 18; OUR IDIOT BROTHER; I DON’T KNOW HOW SHE DOES IT; SARAH’S KEY; and SPY KIDS: ALL THE TIME IN THE WORLD IN 4D. Currently in release are MY WEEK WITH MARILYN; THE ARTIST; THE IRON LADY; CORIOLANUS; W.E.; UNDEFEATED; and BULLY. Upcoming releases include THE INTOUCHABLES. Recently wrapped was SILVER LININGS PLAYBOOK, and currently in production is DJANGO UNCHAINED.

TWC is also active in television production, led by former Miramax Films President of Production and current President of Television Meryl Poster, with credits including the Emmy® nominated and Peabody Award winning reality series Project Runway, spin-off series Project Accessory and Project Runway All Stars, the VH1 reality series Mob Wives, and the critically acclaimed HBO comedy/crime series The No. 1 Ladies Detective Agency which also received a Peabody Award. The company is currently in pre-production on the martial-arts epic Marco Polo for Starz as well as production on the second season of Mob Wives and the newest installment in the series’ franchise Mob Wives Chicago. TWC additionally has 17 series in different stages of development, including The Nanny Diaries, being adapted for ABC by Amy Sherman Palladino (Gilmore Girls).