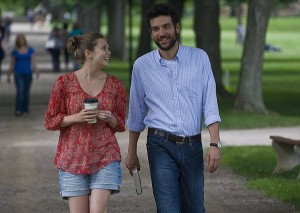 The opening film has been announced for the 2012 Dallas International Film Festival, and it’s going to be a good one.  The opening night film will be ‘Liberal Arts’ which is directed by Josh Radnor and stars Elizabeth Olsen (Martha Marcy May Marlene), Zac Efron, Allison Janney, and Richard Jenkins.  The film will screen at the Majestic Theatre in downtown Dallas on April 12th.

Liberal Arts’ is about a newly single and uninspired by his job in college admissions, the introverted Jesse Fisher (Josh Radnor) lives with his head buried in a book. His deep nostalgia for his own alma mater in Ohio – the dining halls and dorm rooms, the parties and poetry seminars – makes him wonder if his best days are behind him. So when his favorite professor (Richard Jenkins) invites him back to campus to speak at his retirement dinner, Jesse jumps at the chance. Meeting Zibby (Elizabeth Olsen) – a precocious classical music-loving sophomore – awakens in Jesse long-dormant feelings of possibility and connection.

I’ve had the pleasure of interviewing Elizabeth Olsen, and not only is she a stunning actress, but she is also a class act.  You can see my interview HERE.  That interview was from ‘Martha Marcy May Marlene’.  I’m super stoked about his film.