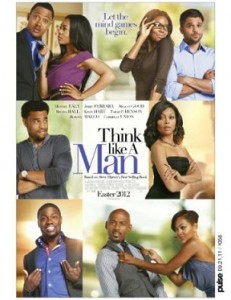 Tim Story’s ‘Think Like A Man’ is comedy gold.  I completely underestimated this film, expecting stupid sex jokes, flat character development, and ridiculous male posturing. But by the end of the film, my cheeks were sore from laughing, and I discovered that romantic ensemble comedies are still in business. ‘Think Like A Man’ is a hilarious film that will keep you smiling for days to come.

‘Think Like A Man’ is based on Steve Harvey’s self-help relationship book, ‘Act Like Lady, Think Like A Man.’ In the movie, the female characters read Harvey’s book and implement his advice to get their men to commit. The tables are turn when the men learn their girlfriends’ strategies and use it against them.

Much in the same vein as ‘Love Actually’, ‘Think Like A Man’ follows several different new relationships as they blossom.  There is the mama’s boy who falls for a single mom, the top female CEO who falls for the unemployed big dreamer, the geeky science fiction nerd who doesn’t want to grow up or propose to his long time girlfriend, the player who has to wait three months before he can have sex with his girlfriend, and the recently separated guy who seems happy to be single and eager to jump in bed with the first available woman. These stories intersect through the men, who drink and play basketball together. 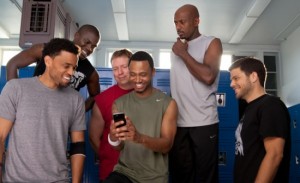 Just as he did in ‘Barbershop’, Tim Story did an amazing job with this ensemble cast. Each actor gave a great performance, and between the jokes, it was fun to watch the characters develop into better people. But above all else, the person who stole the show was Kevin Hart (who plays the newly-single Cedrick).  His performance was just pure genius. It was as if the movie was written just for him.

If you are looking for a light-hearted comedy that is full of laughs, this is the movie to see.  It is also a great date-night movie, that will entertain both you and your significant other.