Will Ferrell Will Return in ‘Anchorman 2’!!! 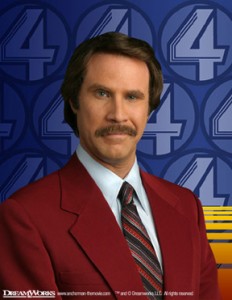 By the great hammer of Thor!!!  ‘Anchorman 2’ is officially in the works.  Judd Apatow, Will Ferrell and Adam McKay will produce the film with McKay directing and writing the screenplay with Will.  All the cast members will be back including: Steve Carell, Paul Rudd, and David Koechner.  Not only did the sequel get greenlit today, but Ron Burgandy himself came onto Conan tonight and made the announcement himself while playing the flute.

This project has been on and off so many times over the years, I never thought we would get a sequel.  So many of the cast are big time stars now.  The 1st film came out eight years ago.  But I’m super psyched to see a new story of Burgandy and the channel 4 news team.  I just hope all the cameos and Wes Mantooth make an appearance.

2 thoughts on “Will Ferrell Will Return in ‘Anchorman 2’!!!”