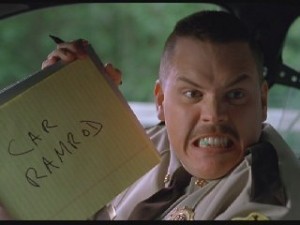 Good news everyone.  There will be a sequel to everyone’s favorite Highway Patrol.  ‘Super Troopers’ is getting a sequel.  Say what you want about Hollywood making sequels or remakes and it being terrible.  This is not one of those times.  This is great news.  It has been eleven years since the first ‘Super Troopers’ and it looks like the cast and crew are ready for a sequel.

At SXSW in Austin, Jay Chandrasekhar (Thorny) and Kevin Heffernan (Farva) discusses the ‘Super Troopers’ sequel with IFC while they were promoting their new film ‘Babymakers’.  There has been a lot of talk over the years about a sequel, but not until SXSW was it confirmed.

“We’re hoping to make ‘Super Troopers 2′ eventually,” he said. We’ve written the script and as soon as we figure out a little sort of legal thing with Fox, I think we’ll hopefully get a chance to make that.”  “It’s ready to go,” added Heffernan.

I hope this pans out.  Your thoughts?