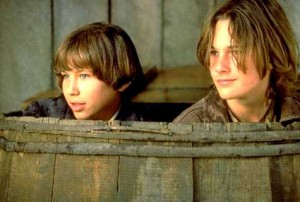 Paramount has purchased the project ‘Huck’ written by Andy Burg.  Everybody is being quiet aboutt he project, but this is supposed to be a re-imaging of sorts of the Mark Twain 1876 novel.  Think along the lines of these upcoming Snow White films and how they are being retold.  Expect that kind of re-imagining with ‘Huck’.  We’ve heard that Finn and Sawyer will be adults in the film and there will be some sort of paranormal element to the film, according to HWR.

Peter Chernin and Dylan Clark are producing the film.  Chernin and Clark produced the recent ‘Rose of the Planet of the Apes’ film.  The last time I really saw a Tom and Huck film was back in 1995 and it starred Jonathan Taylor Thomas and Brad Renfro.  So, I am very happy to be getting a more adult version of this classic tale.  I am very curious to see who lands the directing job.  I can totally see Tim Burton doing this.