Michael Bay Says That The Teenage Mutant Ninja Turtles Will Be Aliens!!! 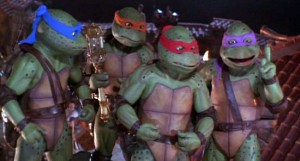 So, Michael Bay and his Platinum Dunes studios will be producing the new live action TMNT film that will come out on Christmas of 2013.  Michael Bay feels the need to change the origin story and make the turtles aliens from another planet.  I mean, the origin story is pretty clear of the turtles.  A chemically engineered ooze spilled over the turtles and they transformed into what they are.  Splinter (the rat who was covered in the ooze as well) taught the turtles karate and they grew up to be crime fighters and eat pizza.

Jonathan Liebesman will direct the film with Michael Bay producing.  Liebesman directed the horrible film, ‘Battle: Los Angeles’.  Hollywood really does fail upwards.  Describing the characters, Bay says, “These turtles are from an alien race, and they’re going to be tough, edgy, funny, and completely lovable.”  He also went on to say “Kids will believe one day that these turtles do exist when we’re done with this movie”, according to ScreenRant.

This is just insane.  Do we really need Teenage Mutant Ninja Space Turtles?  No we don’t.  I don’t like where this is going.  But i am happy to see that the pizza the turtles will be eating are considered vegetables now.  Your thoughts?

8 thoughts on “Michael Bay Says That The Teenage Mutant Ninja Turtles Will Be Aliens!!!”