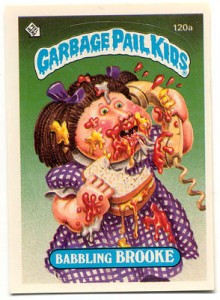 We reported a while ago that there will be a ‘Garbage Pail Kids’ film coming at some point.  It will not have anything to do with the 80’s film of the same name.  Michael Eisner’s The Tornante Company will finance and produce the development of a feature film based on Garbage Pail Kids’.  Eisner bought the rights to the trading card phenomenon a few years ago along with the card company.

PES will direct the film and Michael Vukadinovich will writer the script according to Deadline.  PES ,yes that is what he goes by, has worked with Michael before and is known as short film director.  You have probably seen some of his shorts as of recently, because they go viral pretty quickly.  His recent short was ‘Fresh Guacamole’.  A few of his others include: ‘Western Spaghetti’ and ‘Roof Sex’.

I know I had a small collection of ‘Garbage Pail Kids’ cards and I watched and enjoyed the film back in the 80’s.  No casting or story has been made as of yet, but I just hope this is a live action sort of film without CG.  And I hope the film is at least PG-13, but I prefer an R rating, because to get the full effect of just how gross some of these characters are, they will have to go all the way.

Who would you want to see on screen as a character?  Your thoughts?

And check out the traile for the original 80’s ‘Garbage Pail Kids’ Film.