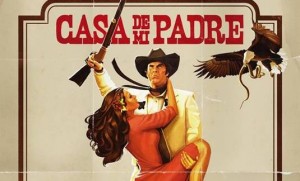 Will Ferrell premiers his new found Spanish language skills in Casa de Mi Padre, a Mexploitation film following the cue of Robert Rodriguez, but done in marvelous Zuckere-esque deadpan parody.Evidently, Ferrell was able to score two of Mexico’s most popular and very talented actors, Gael Garcia Bernal and Diego Luna, to come on board with him and take a trip through a Narco-trafficking adventure on a border town ranch where power and honor, and a hot chick, are all that matters.

Bernal and Luna are phenomenal at comedy, and it was totally unexpected.  I can only assume that they watched a fair amount of Leslie Nielsen films growing up, because they emulated his comedic timing perfectly, stealing every scene they’re in.

Ferrell reprises his well known dumb but lovable hero, but does it all in Spanish.  It may be a bit of an overdrawn running gag, but he actually learned the language well enough to be less of a joke and more of an actual attempt to actually do Spanish comedy.

It’s not Will Ferrell’s best film, but a great big screen debut for director Matt Piedmont, who will hopefully help bring back the parody genre back to the Airplane! glory days and away from the “date/epic/etc… movie” films that have overrun the genre.

Ultimately, the most impressive part of the film comes from real life best friend Mexican superstars Bernal and Luna, who take a step away from indy-dramas and really just have a load of fun with their roles.

Definitely worth a watch, although I’ll admit that, as a Mexican-American viewer, the theme of drug cartels is still too real of a current event to find entirely hilarious…but the film delivers some great laughs and makes the bad guys the butt of the jokes.