Eddie Izzard Set To Star and Produce in The Remake of ‘The Munsters’!!! 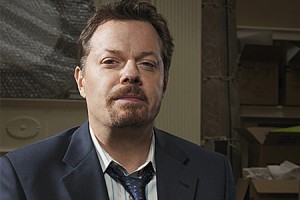 As we previously reported (HERE), NBC is rebooting the beloved tv series ‘The Munsters’.  They will be calling the reboot ‘Mockingbird Lane’ and comedian and actor Eddie Izzard is the first to be cast in the series according to Deadline.  ‘Mockingbird Lane’ will be written by Bryan Fuller (Pushing Daisies/Heroes) and directed by Bryan Singer (Usual Suspects/X-Men).

Izzard will play Grandpa, the Munster family patriarch, a powerful, ancient vampire with an irrepressible twinkle in his eye. He can shapeshift into rats, wolves, and other creatures at will, but he’s also dapper and charming in a fedora; he is a Don Juan-type womanized with penchant for flashy, sexy outfits.   Izzard was actually offered the role a few months ago, but had to back out due to other projects.  But all seems well today.

If this is the sort of casting I can expect for this Munsters reboot, then this is going to be AMAZING.