Colin Farrell Won’t be Starring in ‘Arthur and Lancelot’!!! 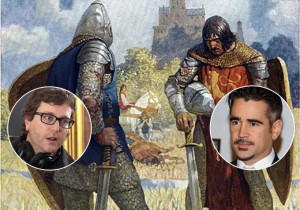 We previously reported that Colin Farrell was in talks to play Lancelot in an upcoming project titled ‘Arthur and Lancelot’.  You can read that story HERE.  Things have fallen through and it looks like Colin Farrell will not be playing that role.  And we hear that scheduling is the reason for his passing on the project according to Deadline.

This project has hit a few speed bumps before.  This role for Colin was going to be a very heavy role with tons of prep work and tons of training.  Colin did not have the time to commit due to his other projects in the works.  Also Warner Bros. rejected the film due to the budget being over $20 million than they wanted to pay.  Just to be clear, Warner was set to pay $110 million for the film, but did not want to pay $130 million for it.

The studio is wanting Gary Oldman for Merlin and at one point had  Game of Thrones’ Kit Harington to play Arthur and The Killing‘s Joel Kinnaman to play Lancelot, but the studio decided against it for them being mostly unknowns for an epic budget film.  So now it’s more or so back to the drawing board in terms of casting.  I expect to see a big name get the role and soon since this film has a March 15th ,2013 release.