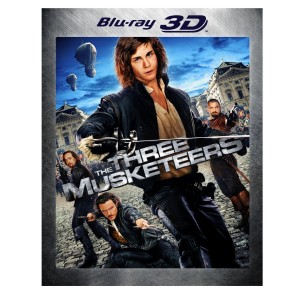 So, Paul W.S. Anderson directed this film.  He is known for directing ‘Mortal Kombat’, ‘Alien Vs. Predator’, and a couple of the ‘Resident Evil’ films.  Anderson gets these mega films to make and he gets a pretty great cast in all of his films as well.  I really don’t know where it goes wrong, but I know it all lies on him.   In this case, he has given us his vision of Alexander Dumas’ ‘The Three Musketeers’ and it just doesn’t work.  I will say a few things about it I did like though.  I did enjoy the whole different approach to the sets, costumes, and steam punk-ness vibe it had with all of the air crafts and other sets.  I also enjoyed the cast quite a bit.  With Orlando Bloom, Milla Jovovich, Matthew Macfadyen, and Luke Evans to name a few of the great cast members, they work and make it look good.  But that only goes so far.  If you know the ‘The Three Musketeers’ story then, when you watch this version, you will get a very different story.  There are some major quirks and changes to this version that just don’t make any sense or it all falls flat and uninteresting.  Like pretty much all of Anderson’s films, ‘The Three Musketeers’ is more about the style and how it looks cool, more than story, characters, and staying remotely faithful to the story.  I really wanted to like this film, and there are aspects I do enjoy.  For example, if I wanted to watch a ridiculous pop corn type of flick, I might put this in my “maybe” pile.  I can see people enjoying this, but ‘The Three Musketeers’ is near and dear to me and I think Anderson’s version of it fell short. 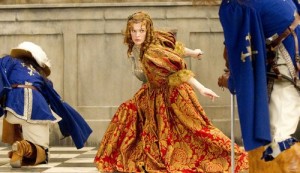 The video is presented in glorious 1080p with a 2.35:1 aspect ratio and it looks phenomenal.  This is a demo disc.  If someone comes over to your house and wants a presentation on why blu-ray kicks so much ass, then put this in.  The depth is amazing from start to finish and the colors are bright, vibrant and eye popping.  It’s gorgeous.  The 3D is really cool too.  While there might not be much of the “objects flying out at you” sort of thing here, the depth and dimensions really make objects and land pop out.  It will really feel like you are in the movie.  The textures on the outfits and sets are impeccable.  You can see every stitch, scratch, and grain of dirt.  The blacks are deep and inky and the use of colors in this film really make the film top notch.  This is an amazing video presentation.  The audio comes in a DTS-HD 5.1 audio mix and sounds out of this world.  Your speakers will get the full work out.  The dialogue is crisp and clear without any hissing or scratches.  The score sounds great over the film while the action sequences roar and the bass booms.  Everything seems natural and not forced.  The ambient nose sounds great and give the rears a good workout. This audio track is too demo worthy. 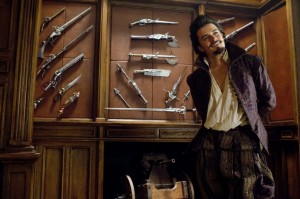 Paul W.S. Anderson’s ‘Three Musketeers’ is a fun, brainless, and dumb film.  It lacks good storytelling and character development, but it goes the distance in the visuals.  Style over substance.  But that’s not a surprise for a film that is coming from Anderson.  The video and audio are excellent.  If you have your friends over and want to rock their world to blu-ray, you can put this in and have no doubt they will be impressed.  The extras were a let down besides the PiP feature.  The 3D is amazing as well.  If you are a 3D fan, than this is a definite buy, but until this bluray goes under $19.99.